A cyclist rides in a bike lane along Johnson Street in Victoria, well separated from vehicles. Photograph By DARREN STONE, TIMES COLONIST The B.C.
V.I.A. Nov 4, 2017 11:02 AM 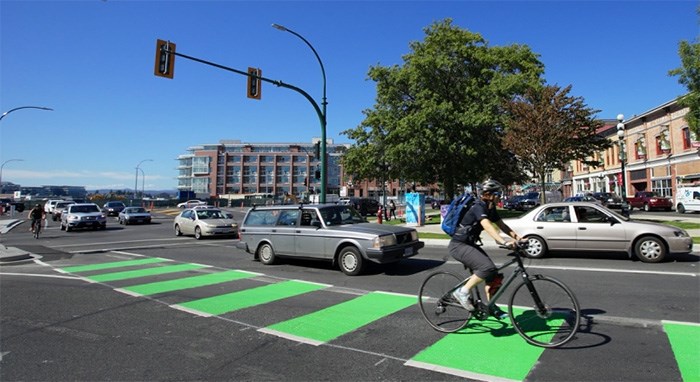 A cyclist rides in a bike lane along Johnson Street in Victoria, well separated from vehicles. Photograph By DARREN STONE, TIMES COLONIST

The B.C. government will consider raising fines for drivers who “door” cyclists and setting a safe passing distance as ways to improve road safety.

Transportation Minister Claire Trevena said her ministry is keeping an eye on other jurisdictions to see how well such regulations work there.

“We’ll monitor what they’re doing, see how effective it is,” she said, during a debate of her ministry’s budget, in response to a question from North Vancouver-Seymour Liberal MLA Jane Thornthwaite.

Trevena said any changes would occur in co-ordination with the Ministry of the Solicitor General and police.

“Dooring” occurs when someone in a parked vehicle opens their door into the path of a cyclist.

In Ontario, drivers face a $365 fine plus three demerit points for dooring a cyclist. They must also leave a one-metre distance when passing cyclists or face a $110 fine and two demerit points.

The fine in B.C. for dooring is $81, plus two driver penalty points.

One in 14 B.C. car crashes involving cyclists are the result of dooring, according to the Insurance Corp. of B.C.

“This is easily preventable with a handy trick — open with your hand furthest from the door. It makes you twist a little in order to reach the door and remind you to do a shoulder check before proceeding,” it said.

Amelia Potvin, executive director of the Greater Victoria Bike to Work Society, said she has had close calls with doors swinging open in her path.

Potvin gives herself at least a one-metre berth when cycling next to cars, which sometimes means “taking the lane” — and the society works to educate people that that’s OK.

“We let people know it’s always good practice to take more of the lane, if you feel that’s where you need to be, to be out of the door zone,” she said.

“It’s important to realize, when cyclists do that, it’s not because they’re trying to slow traffic.”

Victoria personal injury lawyer Darren Williams, principal at League and Williams, said his office handles 250 to 300 motor-vehicle accidents annually, 15 to 20 involving a vehicle and cyclist getting too close.

“They’re the most serious cases, because the victim obviously is more vulnerable,” Williams said.

While there’s no B.C. law specifying how close a vehicle can get to a cyclist, you still have to drive with due care and attention, he said. In one memorable case, he said a truck driver lost a case against a cyclist he drove close to, without touching.

“The cyclist was an older man, who was quite experienced. A truck came up beside him and passed quite close. It’s an interesting case, because the truck didn’t even touch him, but it came so close that it startled him, causing him to lose his balance. He ran off the road and was quite badly injured,” Williams said.

“The vehicle doesn’t even have to touch a rider in order for the vehicle to be responsible.”

On the flip side, many cyclists don’t realize they’re prohibited from certain things, like passing a vehicle on the right, Williams said.

“There’s a responsibility on the cyclists’ part as well. In fairness to vehicle drivers, we have to be careful that the one-metre passing rule doesn’t become some licence for cyclists to be less responsible with their own safety.”