Ten years after the original 36 trains that form the SkyTrain’s Canada Line arrived in Vancouver, the first two cars of a planned 24-car, $88 million expansion were delivered at Fraser Surrey Docks on July 30.
Jul 31, 2019 3:32 PM By: Business In Vancouver

Ten years after the original 36 trains that form the SkyTrain’s Canada Line arrived in Vancouver, the first two cars of a planned 24-car, $88 million expansion were delivered at Fraser Surrey Docks on July 30. 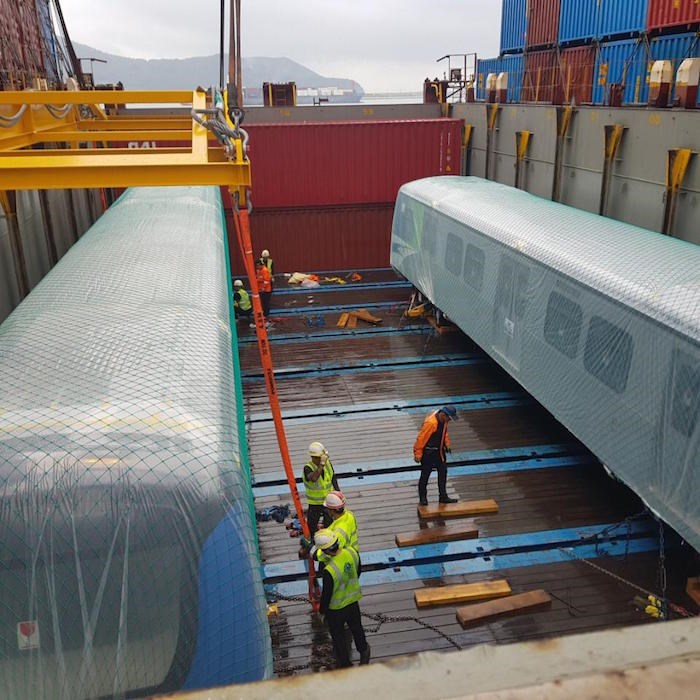 A new Canada Line train is prepped to be shipped to Vancouver. Photo courtesy TransLink

And although a lot has changed in Vancouver since the launch of the Canada Line, which now serves around 27% more riders per year than when it started, one thing hasn’t: the company that made sure the trains get from South Korea to Vancouver.

“Being a Canadian company, we’re quite proud to support the continual growth and infrastructure of Vancouver by bringing these trains,” Patrick Lo, president and CEO of logistics provider Canaan Group, told Business in Vancouver.

Canaan won the contract to bring over the new train cars after successfully handling the delivery of the original Canada Line trains from South Korea, where they’re manufactured by Hyundai Rotem, in 2009.

But unlike the last time, which consisted of only one shipment of 36 trains transported via a breakbulk vessel to kick-start the line’s operations, this time the order will be handled in five shipments loaded onto container vessels. The regular schedules maintained by these shipping services allows for a faster and more frequent transit time, Lo explained.

The two newly delivered train cars are expected to arrive at the Canada Line’s operations and maintenance centre (OMC), which is located near Bridgeport Station in Richmond, by the end of the week. TransLink anticipates the 24 new cars will go into service in early 2020, after undergoing testing and commissioning in the next few months.

These additions to the Canada Line represent a 60% increase of the line’s fleet, and are separate from a 56-car expansion of the Expo and Millenium lines’ fleets that will come at a total cost of $210 million.

The $298 million total investment in the new train cars is being financed by the Public Transit Infrastructure Fund, half of which is funded by the federal government. An additional 33% is provided by the provincial government, with the final 17% supplied by TransLink.

The decision to expand the SkyTrain’s fleets is a response to growing transportation demand in the region, as envisioned in Metro Vancouver's 10-year regional transportation plan.

According to TransLink data, from 2000 to 2016 transit ridership increased by almost 70%. In comparison, Statistics Canada data shows the population of Metro Vancouver by only 23% over the same period.

And in February of this year, during the announcement of the early arrival of 28 of the Expo and Millennium Line cars, TransLink CEO Kevin Desmond said that ridership in Metro Vancouver had seen “back-to-back record years.”

TransLink expects the additional 80 SkyTrain cars will increase capacity by about 10% for the Expo Line, 23% for the Millennium Line, and 30% for the Canada Line, with a total of 8,200 additional spaces on both directions of all three SkyTrain lines during peak hours.