Representatives with the province’s transportation ministry are scheduled to make a presentation to council on Monday evening to discuss the George Massey Tunnel replacement plan.
Nov 25, 2019 7:32 AM By: Sandor Gyarmati 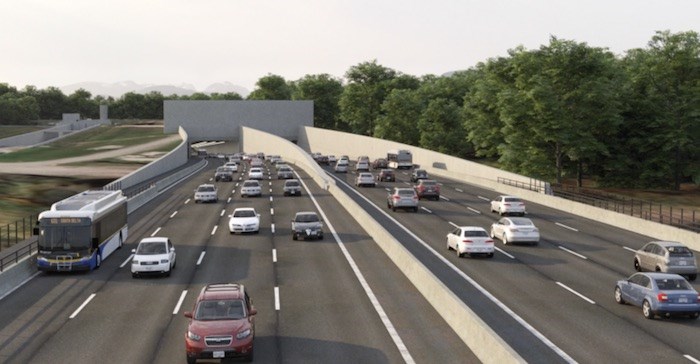 A new eight–lane immersed tunnel under the Fraser is years away from reality. Photo submitted.

Representatives with the province’s transportation ministry are scheduled to make a presentation to council on Monday evening to discuss the George Massey Tunnel replacement plan.

The Metro board recently voted in favour of endorsing the Mayors’ Task Force recommendation for an eight-lane immersed tunnel, although the province will be making the final decision.

Mayor George Harvie and Coun. Bruce McDonald, Delta’s representatives on the Metro board, voted in favour.

Following a debate this month, Delta council voted in favour of a motion put forward by Lois Jackson to notify Metro Vancouver and the province to provide more information for people to get a better idea about the tunnel proposal.

That information should include projected traffic volumes, the expected lifespan of the new structure and costing details, among other things, she said.

“We’re talking about congestion for our people today and for all those people that are coming into the future. Is this not the reason we’re really replacing the outdated, antiquated crossing because of the volume? But we don’t have any analysis associated with this current study that I can see,” Jackson said.

“This is not going to solve our traffic congestion problems today, let alone after an additional one million people that are projected to move to the Lower Mainland, primarily south of the river. We can talk about them moving onto transit all we want but we know that tunnel is not going to be any less used in the future,” she added.

Frustrated the 10-lane bridge project that was about to be constructed was scrapped by the new provincial government, Jackson expressed other concerns including the length of the environmental assessment process for a new tunnel.

Public consultation on the eight-lane tunnel plan is to begin shortly.

The province is to have a business case on a preferred option by the end of 2020.