This week, SFU launched a new website extolling the virtues of a gondola, with background, photos, links to the TransLink feasibility study and more.
Jul 18, 2019 10:33 AM By: Chris Campbell

Simon Fraser University has stepped up its campaign to get approval for a gondola up Burnaby Mountain.

This week, SFU launched a new website extolling the virtues of a gondola, with background, photos, links to the TransLink feasibility study and more. 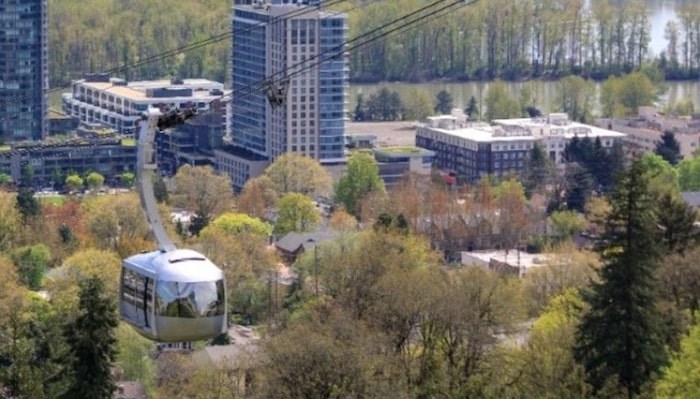 SFU has this image of an urban gondola on their new website. Screenshot/sfu.ca

“According to TransLink’s study, a Burnaby urban transit gondola would carry as many as 3,000 people an hour and cut the ride time in half for commuters from Production Way. It would also free up 26 buses that could be used to service more suitable routes in Metro Vancouver, helping to meet the growing demand for public transit while providing a safe and secure alternative for the university community and UniverCity residents in the event of a road closure.”

The economic benefit of the project is estimated to be 1.8 times the cost; the total projected cost is less than $197M; and it can be built within an 18-month construction window.

“Burnaby Mountain has among the worst performing bus routes in the region, creating some of the longest commute times in Canada for thousands of SFU students, faculty, staff, visitors, and residents,” says the website.

With campuses in Burnaby, Vancouver and Surrey, Simon Fraser University has over 35,000 students, 1,000 faculty and 5,600 staff that travel between campuses on a regular basis, says SFU. In addition to being a regional education and research hub, which draws commuters from across Metro Vancouver, Burnaby Mountain is home to a community of over 5,000 residents, soon to grow to over 9000.

At peak hours, commuters can see up to four full buses travel past them, doubling the length of their journey up and down the mountain. Bus service is ranked in the bottom ten per cent of routes in the region in terms of overcrowding, poor on-time performance and bus bunching.