The Broadway extension will be able to carry more than three times the number of passengers than the bus.
Sep 17, 2020 2:40 PM By: Elana Shepert 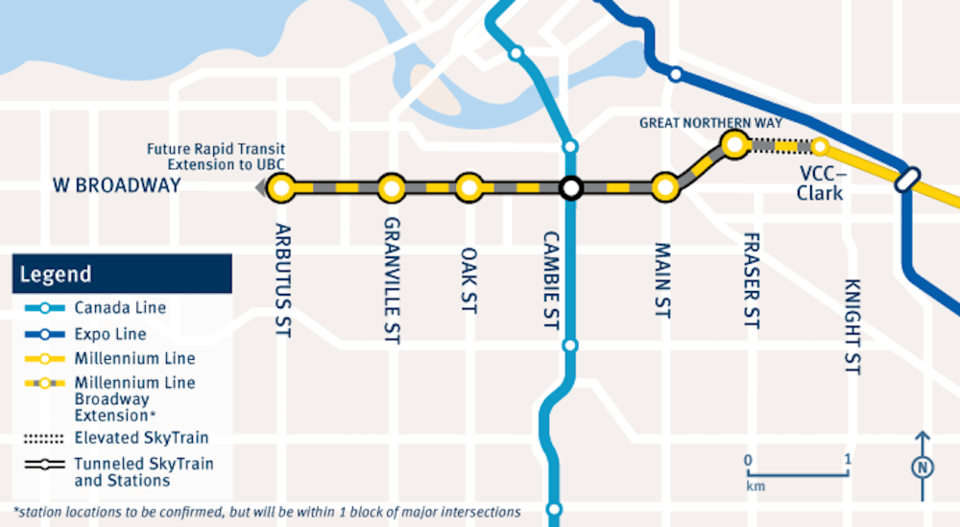 Rapid transit along the busy Broadway Corridor has been identified as a key requirement to ensuring our region stays connected, efficient, and economically strong. Photo: TransLink

Earlier this month, British Columbia Premier John Horgan announced that work will begin this fall on the project.

The Broadway subway is a 5.7-kilometre extension of the city's Millennium line, bringing it to the intersection of West Broadway and Arbutus Street with six underground stations along the way.

While work on the project is slated to begin soon, the subway isn't expected to be in service until 2025.

The extension’s first station features the name of internationally acclaimed British Columbian Emily Carr. In a release, TransLink says it added, "the name Emily Carr to the easternmost Broadway Subway Project station due to its proximity to the Emily Carr University of Art and Design."

One of TransLink’s key Naming Principles is to make names self-locating so that they help make the location easy to find.

“Emily Carr’s painting and life’s work have allowed so many around the world to appreciate British Columbia’s breathtaking natural environment. We’re proud that Great Northern Way – Emily Carr Station will showcase the name of such an important person in the province’s history," says Kevin Desmond, TransLink CEO.

The final names of the Broadway Subway Project stations are:

Michel Ladrak, president and general manager of the BC Rapid Transit Company, says the new SkyTrain line will alleviate pressure on the existing 99B bus line.

He says the Broadway extension will be able to carry more than three times the number of passengers than the bus, which is already the busiest bus route in Canada and the United States with 57,000 boardings a day.