TransLink has announced that Metro Vancouverites can look forward to riding the new snazzy double-decker buses by fall this year.
Jul 20, 2019 3:07 PM By: Elisia Seeber

TransLink has announced that Metro Vancouverites can look forward to riding the snazzy new double-decker buses by fall this year. 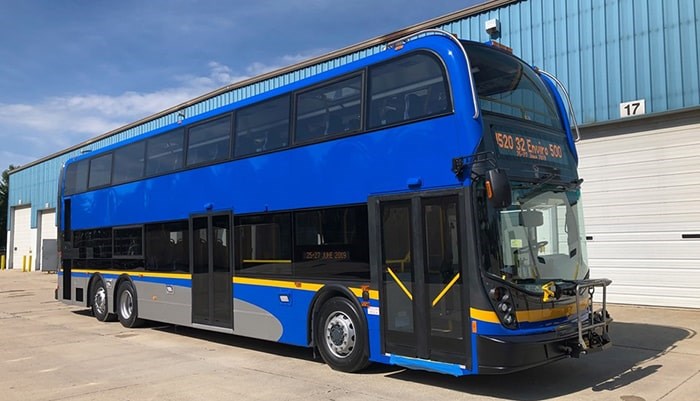 The transit provider made the announcement on social media Friday afternoon.

“Our double-decker buses are now on their way to Metro Vancouver!” TransLink wrote on Facebook.

“Once they arrive they'll undergo inspection and testing before entering service in the fall. Stay tuned for more details!”

The new buses will have double the capacity of a regular bus, a wide, well-lit staircase with handrails and a screen that allows riders to see vacant seats up top before going upstairs.

Plus, the winning feature, panoramic views from the top deck.

TransLink first announced it was adding double-decker buses to its fleet in March 2018, after the success of a four-month pilot project. The double-deckers served seven bus routes in Vancouver, Langley, Surrey, White Rock and Delta during the pilot.

And, at the time, Vancouverites seemed to love them.

A survey from the pilot found that 75 per cent of customers would be more likely to take transit if it was a double-decker.

Double-decker buses were also a hit with bus operators, scoring well in drivability, ease of maintenance and fuel economy.

Twenty-seven of the double-deckers will replace aging Orion buses and five will expand the fleet.