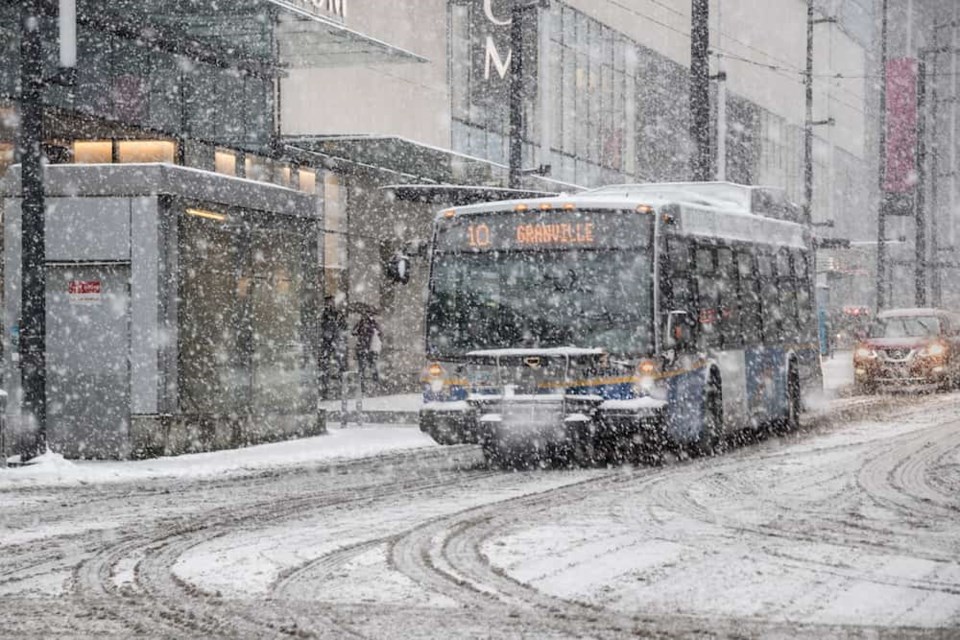 Commuters are cautioned they may experience service delays on TransLink Monday morning. Photo: TransLink bus in the snow in Vancouver/Shutterstock

Commuters planning to get around Metro Vancouver Monday via public transit are being urged to dress warmly and pack their patience, as TransLink cautions riders of potential service delays.

Sub-zero temps, paired with Sunday's snowfall across the region have transit users waking up to a mess on the roads for Monday's morning commute, and that means delays, detours, and possibly cancellations on TransLink bus routes.

"We continue to salt and sand bus loops and SkyTrain stations, but please use caution in these areas and remember to dress warmly in anticipation of potential delays," notes TransLink on their website.

Both the SkyTrain's Expo and Millennium lines will be operating with four cars, which means increased capacity but decreased frequency of trains.

When it comes to bus routes, TransLink has issued a blanket alert for all lines: "Bus service may experience delays on some of the routes due to inclement weather. Please allow extra travel time and bundle up!"

Early morning commuters may face detours already, which TransLink has posted via Twitter:

351 Crescent Beach/Bridgeport Station detour 5:35am. Via 152, 16 Ave, both directions (omit Thrift/Oxford) due to road conditions.

If you are still planning on using TransLink Monday, be sure to check their Twitter account and Alerts page online before heading out.

For those making connections to BC Ferries, currently there are no cancellations or delays posted for trips in or out of the two Metro Vancouver terminals.

Jackknifed semi wedged under overpass shuts down Highway 1 in both directions
Jan 13, 2020 5:44 AM