TransLink is beta testing TapRide, an app-based reservation system that allows users to book rides and track buses.
0
Feb 15, 2019 11:16 AM By: Bronwyn Beairsto

Though we might tap our Compass Cards in the same way, riding a TransLink bus on Bowen Island is unlike your average Metro Vancouver experience. We wave down buses, greet drivers by name and settle into seats where we know the faces of at least 75 per cent of the people around us (save tourist season).

As of January, Bowen’s buses have had one more unique feature.

Opening the app, Bowen’s three bus routes are superimposed on a Google Map, with bubbles above the most popular stops. A rider can then enter a pick up and a drop off address. A driver then accepts the request.

Now, the app works with the existing system so riders can only request rides that are already passing by their stop of choice (it’s not a bus version of Uber). However, TransLink’s director of strategic planning and policy, Andrew McCurran said that the future could hold a more on-demand service for Bowen.

“Once app has lots of uptake, we can look at flexibility,” he said.

But at the moment, TransLink doesn’t want to raise expectations.

“We’re trying to figure out if this is reliable or not,” said Niklas Kviselius, manager of new mobility for TransLink, adding that the team is consistently working out kinks as they receive feedback.

Kviselius noted that one of the helpful features at the moment is that passengers, once they’ve booked a ride, can see the location of their bus on-screen, a service that isn’t currently available on Bowen.

McCurran said that drivers have appreciated knowing in low-visibility weather, in the dark and the rain, that there’ll be someone waiting for the bus.

In a separate interview, Pam Mitts, a Bowen bus driver of around 12 years, said that she does not like the app.

“Our service is so awesome the way it is,” she said. “We hardly get complaints anymore from our passengers.” 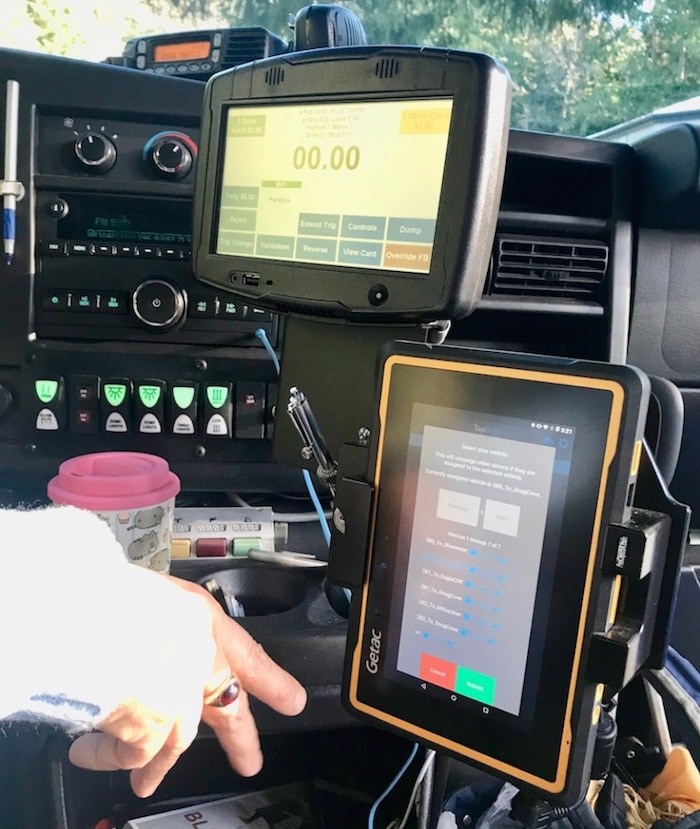 She said that the app is distracting when she’s driving and it’s confusing to use. However, she did say it could be helpful in the summertime when the bus gets overloaded with tourists. Locals could book ahead and reserve their seats.

But it is early days for TapRide.

Of the 11 betas, only six use the app regularly. TransLink hopes to open the program to another wave of beta testers in the next few months.

“We’re taking baby steps with the beta test and the next step,” said McCurran. “To make sure that at every step along the way it’s working for people.”

While TransLink isn’t testing a similar app on any of its other routes, the TapRide team has examined other areas where such apps exist. Bowen’s fixed, limited geography, makes it a good candidate for such an app.

McCurran said that should this program go well, TransLink hopes to roll out the app to other lower density and lower demand parts of the region.

While McCurran and Kviselius wouldn’t give a target date, rather highlighting “continuous improvement,” they did say that they hope to have something with wider use within the year.

TransLink warns rising demand will make physical distancing ‘not always possible'
May 28, 2020 7:42 AM