That final tab has some Surrey councillors questioning decision-making processes at city hall
Jun 10, 2020 7:50 AM By: Graeme Wood 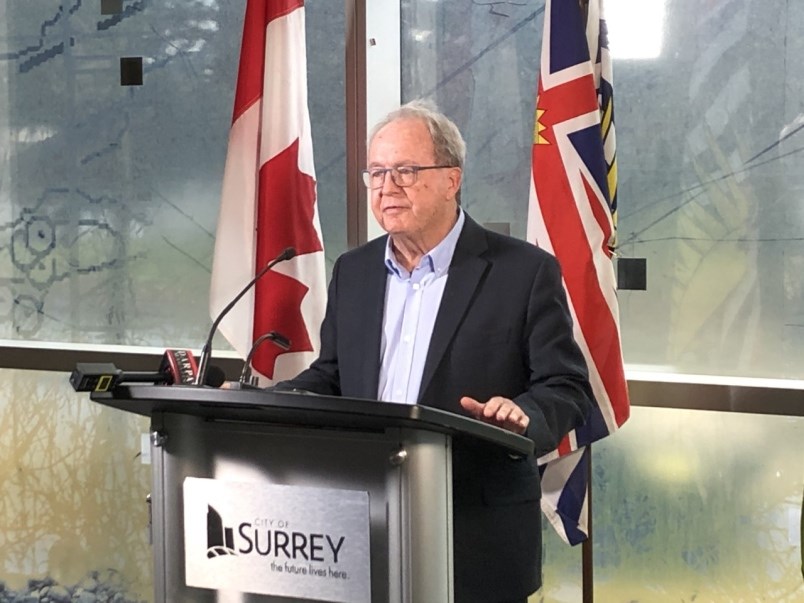 Records show Mayor Doug McCallum sent out a news release January 24 from his office before staff could brief the whole of council on Uber’s Passenger Transportation Board approval January 23. Photo by Graeme Wood/Glacier Media

Ride-sharing companies Uber and Lyft are now officially licensed to operate in Surrey, after their inter-municipal business licences were approved Monday.

But a final tab of $65,130 for a legal battle against Uber last February has some Surrey councillors questioning decision-making processes at city hall.

In late January, following Uber’s approval by the Passenger Transportation Board to operate in the Lower Mainland, the City of Surrey spent $23,321 ticketing Uber drivers.

After Uber filed an injunction against the city in B.C. Supreme Court, the city spent a further $41,809 for legal services provided by Lidstone & Company.

After losing the injunction decision, the city had also been ordered to pay for Uber’s legal costs; however, Coun. Jack Hundial says the company told him it is not sending city hall the bill (estimated by legal experts to be about $15,000), thus finalizing the latest round of controversy between Uber and Surrey’s mayor Doug McCallum, who opposed licensing the
companies through city hall.

Hundial said he believes McCallum encouraged the legal fight, when asked whether the decision to ticket Uber drivers was a unilateral one among council members.

“I believe so and I haven’t seen anything to say otherwise,” he said.

Exactly who all decided to ticket Uber drivers and why is a matter Hundial says has had him perplexed.

Like Hundial, Coun. Steven Pettigrew says the legal battle against Uber is symptomatic of a larger issue.

“My big concern is it’s all done behind closed doors,” said Pettigrew. “This entire discussion should have happened based on an open report in council chambers. Then I can say my bit, the mayor can say his bit and we can have an open vote. And that’s what’s missing in this.
“So, people are forced into guessing what’s happening behind the scenes.”

Glacier Media requested and obtained records on the decision to ticket Uber drivers. However, legal and policy advice from staff was redacted.

Records show McCallum sent out a news release from his office before staff could brief the whole of council on Uber’s PTB approval January 23.

On January 24 at about 10 a.m., Rob Costanzo, manager of corporate services, informed council members that he was working on an interoffice memo “that will provide more detail, bring council up to speed, and highlight next steps.”

But before Costanzo could push the memo out to council, McCallum issued a public statement shortly after 11 a.m. stating, “Until I am assured that a level playing field is established, I will not be supporting the issuing of ride hailing business licenses.”

Costanzo delivered his memo just after noon, in which he outlined how an inter-municipal business license had yet to be finalized and the city had yet to decide on its course of action.

Prior to Costanzo’s memo, he had received a summary from the PTB, including comments on the economic impact on taxis — a chief concern for McCallum’s network of political supporters.

The board stated, “We live in a market economy and competition is the norm in marketplaces.”

There is no written communication between McCallum and staff, so he presumably processed his news release by phone or in person.

McCallum declined to comment on the failed legal battle against Uber.

“I don’t know any situation where the city would have a legal opinion and the mayor would come out with something like this prior to being shared and discussed by council,” said Hundial.

It’s unclear who at city hall ultimately decided to ticket the drivers and what role McCallum’s public statements played in informing staff on how to proceed.

Costanzo told Glacier Media the decision was outlined in the city’s court defense.

The city had defended itself by arguing there was no municipal licence for Uber to operate. The company, however, argued the city had failed to provide one and it had already been approved by the PTB.

Uber legal director Jeremy Millard told the city in a two-page letter that McCallum’s statement “made clear” that no license would be granted to Uber “even if a ridesharing business licence was available.”

Just after Millard’s letter, city manager Vince Lalonde was asked to approve a draft media statement that the city was to proceed with ticketing Uber for “failure to adhere” to not operating without a city licence.

The next day, Coun. Brenda Locke wrote to Costanzo: “The immediate action that was taken by yourself in the case of Uber was quite frankly surprising, especially when we all know this is a provincial issue.”

Speaking last week, Hundial told Glacier Media the Uber court case is one of many examples where the four council members not on McCallum’s five-member Safe Surrey Coalition have been shut out of decisions.

“There seems to be a general lack of records and information. It’s very disjointed. And not something I’m used to seeing with working with any organization in the past,” said Hundial.

“All of this could have been dealt with in a proper manner if we all showed some patience,” he said. However, “If the mayor were to say that [proceed with ticketing], it’s automatically assumed his four members of council agree.”

Pettigrew added that it was not just city hall, but all the players involved that could have avoided the unnecessary costs to taxpayers.

“I don’t believe the situation was handled properly straight across the board.

Metro Vancouver was working on a regional plan for ride sharing. All they needed was another 2-3 weeks. And the province (PTB) came in and jumped the gun. And that wasn’t done properly,” said Pettigrew. And, “Lyft had the courtesy to wait. Going up against the mayor, there was a lot of tension. So they were respectful and patient whereas Uber pushed their way in; so that wasn’t done properly.”

Study finds 5 possible North Shore rapid transit routes
Sep 15, 2020 2:27 PM
Comments
We welcome your feedback and encourage you to share your thoughts. We ask that you be respectful of others and their points of view, refrain from personal attacks and stay on topic. To learn about our commenting policies and how we moderate, please read our Community Guidelines.