Uber says it wants to partner with TransLink to mine its bus and train data for a mobility app with integrated transportation options – minus taxis.
0
Sep 27, 2019 11:22 AM By: Graeme Wood 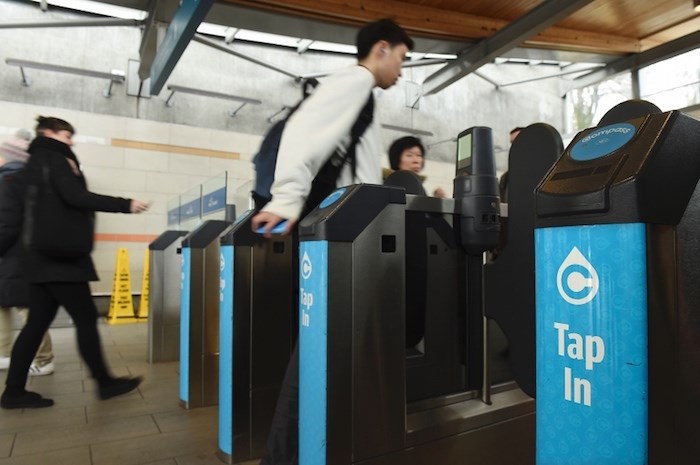 When Compass cards and fare gates were introduced, transit users who are unable to raise their arms found they couldn’t get through the gates without help. Photo Dan Toulgoet

Uber says it wants to partner with TransLink to mine its bus and train data for a mobility app with integrated transportation options – minus taxis.

The board’s keynote speaker was TransLink CEO Kevin Desmond, who has openly supported ride-sharing companies coming to B.C. despite a lack of political will to establish a regulatory framework until recently.

Uber intends to operate only in Metro Vancouver after provincial government ride-sharing applications opened earlier this month. It cites a burdensome regulatory framework for not entering rural markets across the province.

While van Hemmen thanked Desmond for his support, in the U.S. Uber announced the expansion of the Uber Transit app to 10 more cities worldwide. The revamped Uber app incorporates local transit routes, timetables and real-time data into a so-called one-stop shop for commute planning.

While it may seem counterintuitive to provide users with non-Uber options, van Hemmen echoed the statements made by Uber executives that doing so would lead more people to the app and ultimately more revenue.

“We’re trying to provide riders with all their options in one place at their fingertips so they can make the best decision about how to get to their destination,” said David Reich, Uber head of transit, in an interview with the San Francisco Chronicle. “Our goal is to be the Amazon for transportation. Transit is the backbone of how people move around their cities,” said Reich.

It’s San Francisco where a ballot initiative is taking place in November to levy a tax on ride-sharing to pay for public transit, the Chronicle reported. That’s because studies have blamed ride-sharing for increasing congestion. 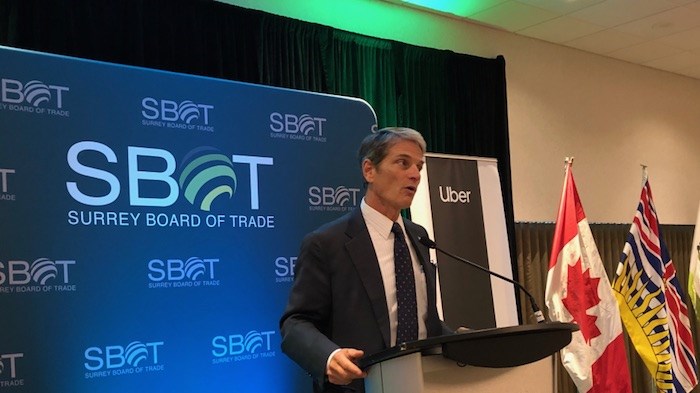 TransLink CEO Kevin Desmond said at a Surrey Board of Trade event September 26 that he envisions Uber integrating into the transit network. Photo by Graeme Wood/Glacier Media

Desmond has long supported ride-sharing, believing it will complement transit services in the Lower Mainland.

Unlike most jurisdictions in North America (all of which introduced ride-sharing in the past decade), TransLink has seen exceptional growth in ridership, said Desmond, who is not concerned about negative effects of ride-sharing.

“Transit investments are not necessarily going to eliminate congestion. We’re a busy, thriving region. So in a vacuum you always fill up the vacuum, so congestion is part of the nature of a very successful region,” said Desmond.

The board meeting was sponsored by Uber.

While the board supports Uber, the city’s mayor Doug McCallum, who has the backing of the politically active taxi industry, is in opposition to it, citing congestion concerns. Earlier this month he said he would not issue business licenses to ride-sharing companies, but the Ministry of Transportation dismissed the idea. It’s unclear whether McCallum will be able to pass bylaws that can disrupt ride-sharing services; the provincial government has told municipalities to consult legal counsel on such matters.

At the event, Desmond spoke to the proposed SkyTrain extension to Fleetwood and the next steps required to fund the extension further to Langley.

Board executive director Anita Huberman spoke to the benefits of what would have been a much longer, albeit slower, light-rail extension that was scuttled by McCallum immediately after he assumed office last November.

Huberman stressed that improved transportation is critical for the city’s growth. She said Uber will complement Surrey’s transit network given its expansive size.