The union representing bus drivers and maintenance workers vowed November 5 to escalate job action on Metro Vancouver’s transit system “in the coming weeks” if progress is not made.
0
Nov 6, 2019 6:54 AM By: Glen Korstrom

The SeaBus will remain on a reduced sailing schedule this weekend due to the transit strike. Photo by lenic / Shutterstock.com

What happened: The union representing bus drivers and maintenance workers vowed November 5 to escalate job action on Metro Vancouver’s transit system “in the coming weeks” if progress is not made.

Why this matters: An escalation up to a full stoppage of transit buses and the SeaBus system will be a major disruption in the region's economy as workers could scramble to get to work.

Union Unifor's promised escalation has so far had no effect in winning concessions. TransLink’s Coast Mountain Bus Co. (CMBC) is keen to bargain a new contract but Unifor has said that the two sides are too far apart for bargaining to take place and it wants more concessions first.

CMBC has said that union demands would cost the system more than $600 billion, and dramatically slow down expansion of the system.

TransLink CEO Kevin Desmond told media, after a November 5 visit to the Greater Vancouver Board of Trade, that his organization has taken steps to provide adequate time for rest breaks for drivers, and that it has hired about 1,300 new drivers in the past two years.

Those hires and attempts to add slack to busy bus routes was not done as part of contract bargaining, he said, but rather “it’s the right thing to do.”

CMBC is one of TransLink’s divisions, and CMBC CEO Mike McDaniel reports to Desmond.

Business in Vancouver asked Desmond whether CMBC had room to negotiate between the salary increases it is offering and the ones that the union is demanding.

“I’m not bargaining in the public,” he said. “I want both sides to get back to the table, and to find a way to make an agreement that is both affordable and satisfactory to everyone’s interest.” 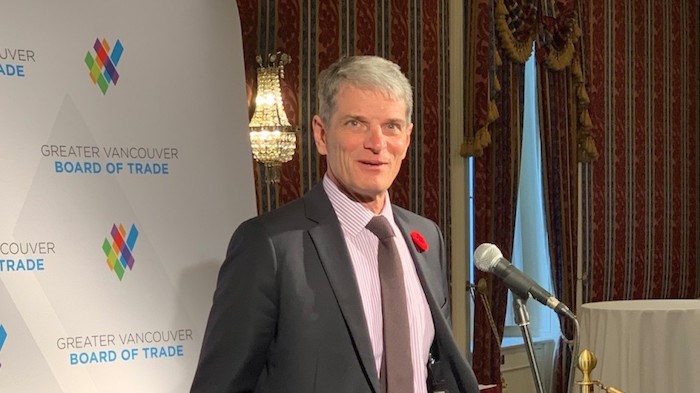 Desmond stressed that it would be a bad idea for his organization to take money out of its capital budget to pay for operational costs.

“I would feel like I was a failure if I passed on the baton of this organization, and I left our physical assets crumbling,” he said, adding that the solution would simply push problems into the future and punish his successor and future generations.

“The buckets [of funding] that we’re looking at are pretty narrow to try to bridge the gap,” said Desmond.

The spectre looms that Unifor could escalate job action up to a full stoppage of Metro Vancouver buses.

Services such as SkyTrain, Canada Line, West Coast Express, HandyDART and the West Vancouver Blue Bus are run by workers in other unions, such as MoveUp and CUPE Local 7000, and would initially be unaffected.

In a worst-case scenario, striking bus drivers could picket rapid-transit stations and shut down the SkyTrain system, much like they did during part of the four-month transit strike in the region in 2001. Workers in unions that operate the rapid-transit system could also theoretically go on strike in sympathy.

BIV asked Desmond if he thought this possibility exists.

“I don’t want to conjecture on something like that,” he said. “Any kind of work disruption, any kind of work stoppage, any kind of diminution of our transit service is going to hurt our riders. The less service, the larger the impact of a job action, the greater impact that it will have on the men and women and the kids who use our transit system every day, whether they are going to school or work or for other activities. I just hope it doesn’t come to that, I really do. It will be painful for everyone.”

There have also been reductions in SeaBus service.

TransLink was expecting to have 14 SeaBus sailing cancellations on November 6. Read details about those cancelled trips HERE.