Something amazing just hit the streets of Vancouver: Justin Wright's dune buggy! Even if you haven't yet seen this thing burning around over the past 5 days since he got it insured I wanted to share some insight on it because surely you will have que
Jul 13, 2015 4:53 PM By: Bob Kronbauer

Something amazing just hit the streets of Vancouver: Justin Wright's dune buggy! Even if you haven't yet seen this thing burning around over the past 5 days since he got it insured I wanted to share some insight on it because surely you will have questions when you do. The first thing I thought when I first happened upon was "HOW IS THIS EVEN POSSIBLE?!"

Justin was kind enough to stop by our office today and not only tell me all about it but he actually took me for a ride in it, and it was just as great as you think it would be (HERE is a video clip). 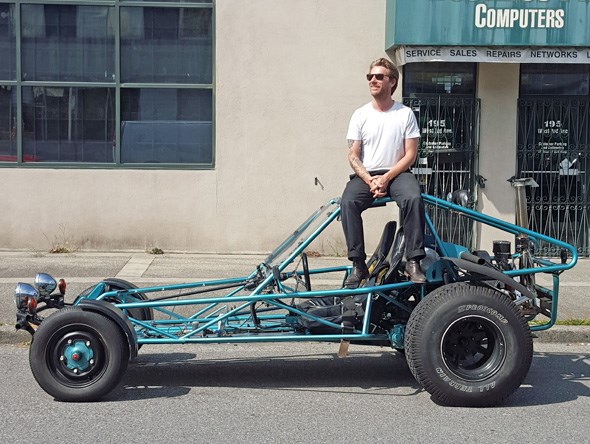 He's affectionately named it "Knuckle Hug", and technically the vehicle is known as a Sand Rail, though laymen like us call it a dune buggy. This one was originally from Oregon and was registered in 1997. It's got a classic Volkwagen bus engine in it, and the frame was custom made by somebody. In order to get it registered in Canada the previous owner had to make sure it had proper mud flaps, windshield, horn, lights and turns signals, crash bumpers, all approved for road use. When they got that approved they were issued a Vehicle Identification Number and it was good to go. It looks a lot different than every other car out there on the road but it is up to snuff in terms of safety and everything else that comes into play with the powers that be.

This car's not only special from the outside (everybody we drove past during our 10 minute ride smiled at it), but the personal story behind it is also really cool. Justin's first car memory was of his dad driving him around in pretty much the exact same vehicle, decades ago, and it's always been a dream for him to be able to rip around in one of these beauties in the city. He doesn't see his dad often but the day after he got it he happened to be passing through town, and he got to turn the tables and take his old man for a spin. Full circle dune buggy action. 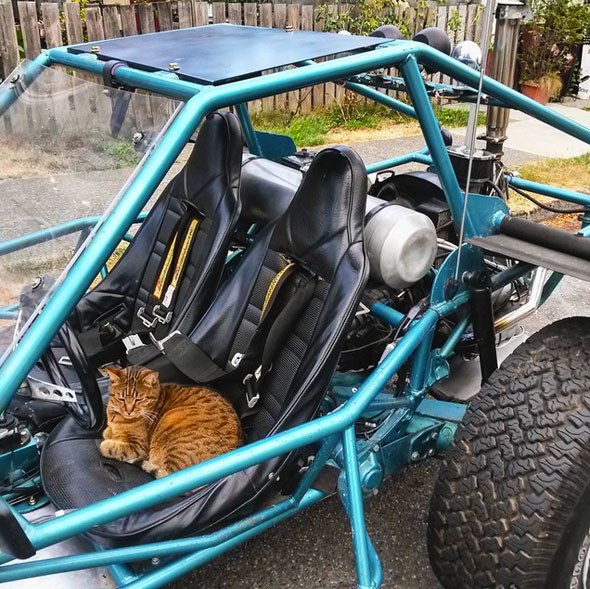 He parks it in Strathcona and I've already heard a bunch of people say they've seen it, so keep your eye out for Knuckle Hug. And be sure to wave at Justin when you see him.