VANCOUVER - Police in Vancouver are hoping pressure from family and friends will succeed where fines and penalties have failed in convincing drivers to put down their cellphones when they get behind the wheel.
Oct 3, 2017 4:17 PM By: The Canadian Press

VANCOUVER - Police in Vancouver are hoping pressure from family and friends will succeed where fines and penalties have failed in convincing drivers to put down their cellphones when they get behind the wheel.

"If you know someone who just won't give up their phone while driving, perhaps you have some influence on them," Robillard said.

British Columbia is far from the only province wrestling with how best to discourage distracted driving. Saskatchewan police also announced a campaign to crack down on the problem throughout October.

"It's frustrating," Robillard said. "You don't need to be a police officer to know that this is a problem."

Karen Bowman, a spokeswoman for the Traffic Injury Research Foundation based in Ottawa, said law enforcement can only be only part of the solution and that any long-term fix needs to focus on changing behaviour.

"This is about driver behaviour and their belief systems and what is socially acceptable," she said.

"It's been a really, really long time since driving drunk has been socially acceptable, but we're nowhere near that with distracted driving." 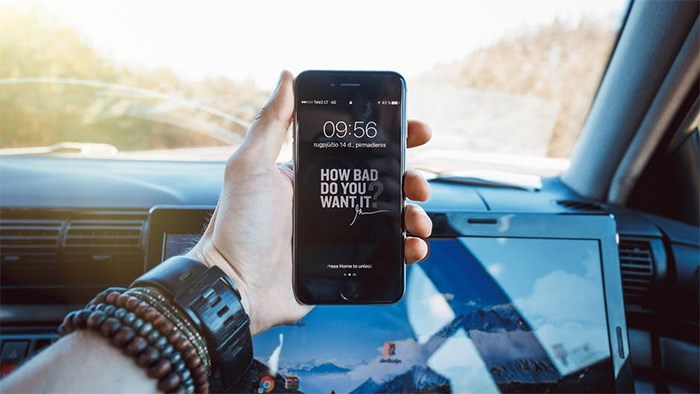 Bowman launched the program Drop It And Drive seven years ago in B.C., which was incorporated into the Traffic Injury Research Foundation earlier this year. It involves educators visiting schools and work places across the province to share evidence-based research into the dangers of distracted driving.

Bowman spoke about the importance of establishing muscle-memory habits, which might include drivers developing the ritual of stashing their phone in the glove box as effortlessly as remembering to put on a seatbelt.

Statistics posted by the Canadian Automobile Association say drivers who text are 23 times more likely to be involved in a crash or a near-crash event than non-distracted drivers, and that 26 per cent of all car crashes involve phone use, including hands-free phones.

In April, B.C.'s public auto insurer launched a research project aimed at exploring how technology could be used to reduce distracted driving.

"We know that the source of a lot of the distraction is technological, so we're hoping we can use technology to counteract that problem," Mark Milner, a spokesman with the Insurance Corporation of B.C., said Tuesday.

Milner said the Crown corporation is looking to launch a pilot project in the coming months, though he declined to give examples of what kind of technology might be involved.

In B.C., distracted driving has surpassed impaired driving as a leading factor in traffic fatalities. The fine for using an electronic device while driving in the province is $368 and four demerit points.

Robillard said Vancouver police hear a number of explanations from drivers who are using their cellphones.

One man said he was watching a financial video from his website, while a woman said she thought it would be all right to have her cellphone on her lap while eating lunch with both hands, he said.

Last month, Vancouver police highlighted the case of a driver who racked up more than $700 in fines and eight demerit points in eight minutes because of a reluctance to put down a phone.

Police posted a photo of the two tickets on social media, showing that within a space of barely six blocks along one of the city's most congested streets, the driver of a rented car was stopped twice for using an electronic device.

Note to readers: This is a corrected story. An earlier version said the Traffic Injury Research Foundation launched the Drop It And Drive program.