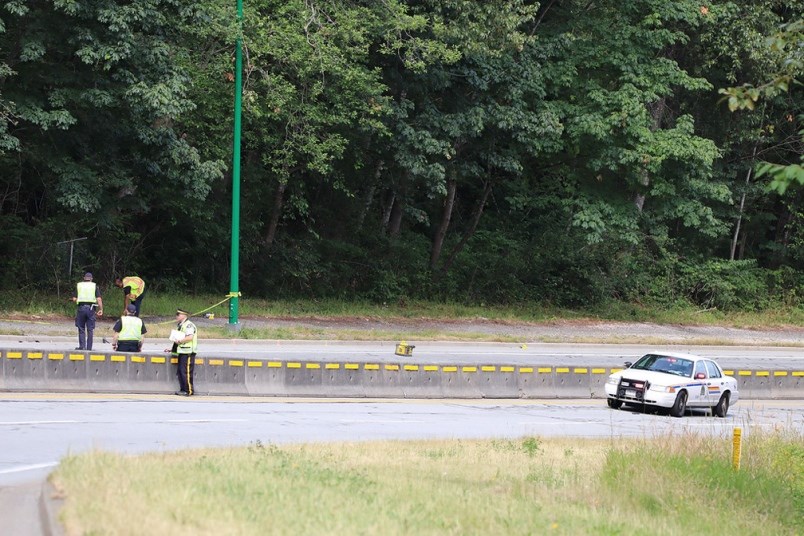 Police investigators on Gaglardi Way in Burnaby after a cyclist was killed in August 2019. SHANE MACKICHAN PHOTO

The City of Burnaby has set some lofty goals for itself in phase one of the city’s upcoming transportation plan, including zero traffic-related deaths or serious injuries.

Council heard this week from senior planner Renee de St. Croix on the completion of the first phase of developing the new transportation plan. In her presentation, de St. Croix updated council on three goals the city is setting for itself for the next 30 years.

The goal of zero deaths or serious injuries is perhaps the city’s loftiest goal and one that will likely prove challenging to achieve. De St. Croix said that can be accomplished in a handful of different ways working in concert.

“The key actions to achieve this target include prioritization of our vulnerable users, transformation of our infrastructure to support these users and then reducing our overall speeds for all modes (of transportation),” de St. Croix told council.

The city also hopes to have three-quarters of all trips starting in Burnaby to be taken by transit or active transportation (walking, cycling, etc.) by 2050. By contrast, the city also hopes there will be no increase in the number of kilometres driven in vehicles by the middle of the century.

“We have a fundamental space challenge. We cannot build our way out of congestion, and therefore we really need to encourage more people to walk, bike and take transit as often as we can,” de St. Croix said.

On the latter point, de St. Croix said the hope is to make sure people no longer need to regularly travel across town – everything they need is already in their immediate area. That could significantly reduce traffic if more people are inclined to stay within their communities regularly.

Coun. Dan Johnston noted the lack of rapid transit between some of the city’s four town centres. While it’s relatively easy to get between Brentwood and Lougheed or Metrotown and Edmonds, which are connected by SkyTrains, there’s less in the way of north-south rapid transit.

De St. Croix acknowledged that issue and said the city is working on it with TransLink, saying the current focus is on rapid buses.

De St. Croix said the city’s emphasis will be to ensure “all travel choices are enjoyable” for residents and to make cities “not just corridors for movement but places for people to be and participate in city life.”

The transportation plan is the first new plan in about a quarter century, according to city spokesperson Chris Bryan, with the current plan put in place in 1995.