This summer, BC Ferries is rewarding creative young minds through a fun drawing contest called Draw the Coast 2018. Of course, you're going to want to read the fine print in the contest rules.
Jul 11, 2018 2:36 PM By: Lindsay William-Ross

This summer, BC Ferries is rewarding creative young minds through a fun drawing contest called Draw the Coast 2018.

Open to kids between the ages of 3 and 12, the parameters are pretty simple: "Draw an original image of your favourite thing about travelling the beautiful West Coast with BC Ferries on an official contest entry form."

Up for grabs are prizes like roundtrip rides on BC Ferries and some ferry-related swag, and while there's been one winner drawn already, they'll be picking winners in August, September, and October, which means there's plenty of time to hand your budding young Picasso the pencil crayons. 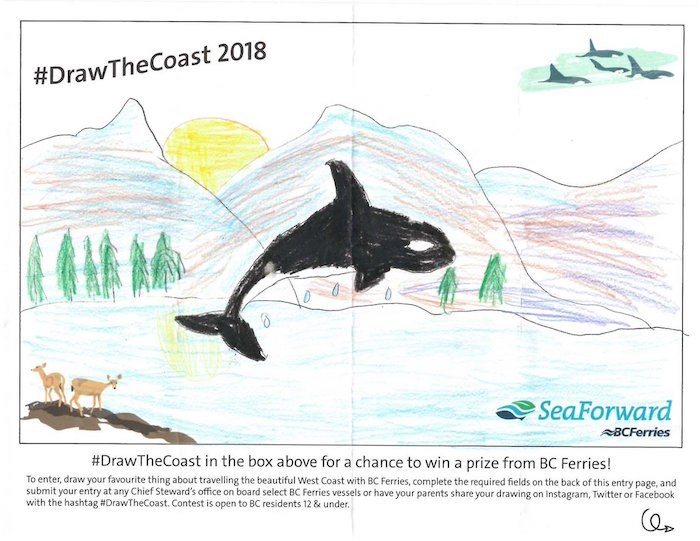 Of course, you're going to want to read the fine print, because the rules for this contest--obviously required by the BC Ferries legal department--are really (like really) intense. Specifically, there are a lot of things kids can't consider their "favourite thing" about catching a ride on BC Ferries, all of which should never have anything to do with riding a ferry in the first place.

In addition to turning in something not original (maybe more applicable for grown ups trying to pass their work off as a kid's than artwork that's overly derivative ), there are a lot of ways for an entry to be disqualified. An entry is acceptable if it:

(ii) does not and will not violate any law, statute, ordinance or regulation;

(v) is not defamatory, trade libelous, pornographic or obscene, and further that it will not contain, depict, include, discuss or involve, without limitation, any of the following:

Obviously, the under 12 set need to have it made clear that this means their drawings can't, let's say, depict a violent and f-bomb laced shootout between naked passengers and comic book superheroes--which, come on, is pretty much what every nine year old loves about BC Ferries. Well, that and White Spot burgers and whale spotting.

This 11-year old won the first round, and, as you can see, she kept it PG with her lovely scene right out of nature.

Congratulations to 11 year-old, Cassie, our first #DrawTheCoast winner! Cassie's drawing was selected from over 2,500 entries. There are more chances for kids 12 and under to win to all summer! Contest details here: https://t.co/MY3DmA6nqU. Good luck! #BCFerries ^mj pic.twitter.com/4HSLbYqzwi

I'm not ashamed to admit I'm ready to download an entry sheet and get my five-year-old his shot at drawing contest glory, because hey--it's expensive to take the ferry in a car! But I'm going to skip going over the rules with him, since that's a lot of stuff I'm not ready to explain to a kindergartener.

All kidding aside, it's a cute contest, and if you know a kid who likes to draw, you should definitely encourage them to enter. Just make sure they don't break the rules.