The new route will be the airline's first flight visiting Canada. ✈️

Vancouverites looking to take a bite out of the Big Apple on the cheap will have another travel option next year.

JetBlue Airways, a low-cost, New York-based airline, will offer non-stop service between Vancouver and New York in the summer of 2022; it will offer seasonal service to Boston, too.

The move is part of plans to add seven destinations to its route map from New York or Boston starting later this year. It is also adding Honduras.

The airline will have to compete with Canadian airlines, including Air Canada and WestJet Airlines on the route to John F. Kennedy International Airport (JFK). That said, a couple of other carriers have stopped offering the nonstop route, including Cathay Pacific and Philippine Airlines.

Cathay Pacific stopped flying to JFK from YVR in March 2020. The Hong Kong-based carrier has flown out of its home base to Vancouver since 1983, and it added flights between Vancouver and New York in 1996. At the time, the route carried the airline’s only flights to the Big Apple.

JetBlue has five different fare classes, as well as two memberships. For members, the rules for each fare class will change, allowing for more flexibility and inclusions than other guests.

The fare classes are Blue Basic, Blue, Blue Plus, Blue Extra, and Mint. For non-members, the lowest fare class, Blue Basic, won't allow for a great deal of flexibility or perks. For example, changes or cancellations come with a $100 USD or $200 USD price tag and don't include a carry-on bag (except for the new London route). Checked bags also cost extra, too.

So far, the airline hasn't outlined whether the Vancouver routes will include any exceptions or extra perks — but travellers should ensure they read the fine print before booking into a fare class that doesn't allow for flexibility.

Many of the airline's domestic flights are competitively priced, with fares starting as low as $99 USD.

JetBlue is a certified three-star airline by SkyTrax — the International air transport rating organization. SkyTrax notes that a three-star rating is applied where "staff service standards or product standards are fair or average."

Air Canada has a four-star rating but Air Canada Rouge is rated three-star, too.

While the airline hasn't confirmed what aircraft it will fly on either of the Vancouver routes, industry observers have noted that it may fly the A321NEO. If so, this aircraft would include "14 fully enclosed Mint suites with all-aisle-access and a door for added privacy." 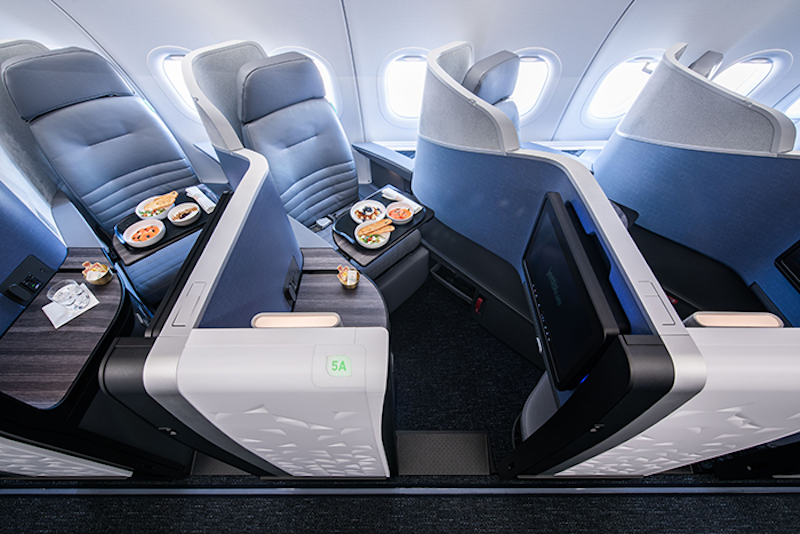 The Mint suites onboard the JetBlue A321NEO aircraft. Photo via JetBlue Airways

The full offerings in Mint:

Regardless of what aircraft JetBlue uses, travellers will enjoy free Wifi as well as free, brand-name snacks and drinks, including freshly brewed Dunkin’ coffee. There's also a TV on the back of every chair and 32 to 33 inches of legroom in Economy Class.

Have a look at a video of the JetBlue A321NEO.

With files from the Canadian Press and Glen Korstrom.

Everything B.C. residents need to know about international and domestic travel
Aug 11, 2021 6:55 PM