Here's everything you need to know about travel in B.C. this year

If you've been dying to head out on a road trip in B.C., you might be able to do so in a matter of weeks.

Provincial officials revealed B.C.'s restart plan Tuesday (May 25), which indicates the restrictions that prohibit non-essential travel between three regional zones in the province will continue until June 15; recreational travel within a regional zone is permitted.

The regional zones are:

On June 15, as long as COVID-19 numbers continue to trend down, the province will lift the restrictions banning travel across the province. Recreational travel will be permitted and BC Transit and BC Ferries will increase services as needed.

Travel across Canada is expected to resume on Canada Day (July 1).

B.C.'s Restart — a four-step plan to bring B.C. back together — will be a slow and gradual return to a more normal life, with safety and health protocols such as mask-wearing and physical distancing remaining in place and mandatory during the initial two steps of the plan. 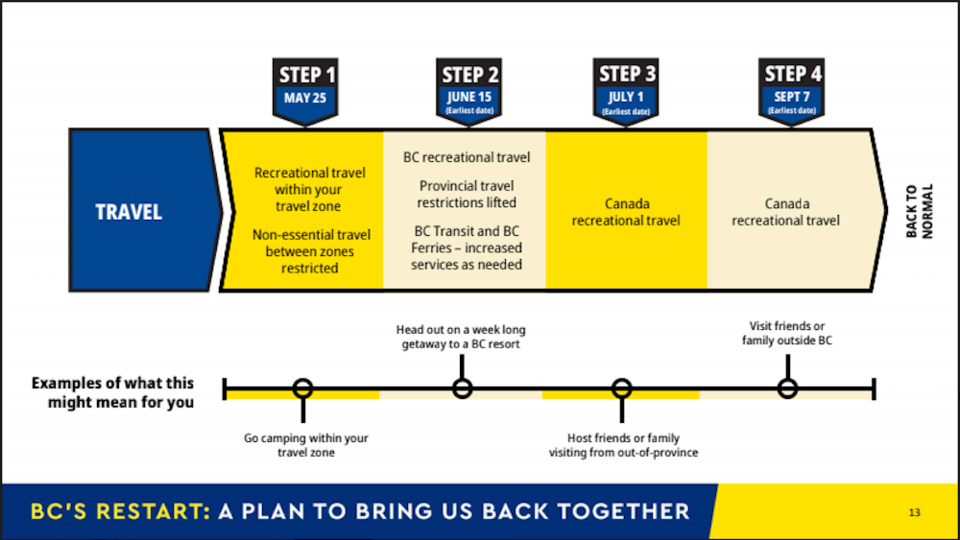 Photo via Government of British Columbia

When asked why restrictions on gatherings and indoor dining are easing up ahead of travel, Provincial Health Officer Dr. Bonnie Henry told reporters that there are differences in transmission rates in communities around the province.

"It is a very effective measure of stopping transmission in introductions into communities. We're not yet at that point where enough people are immunized, where case levels are low enough, so that was the rationale around that," she explained.

"We know that indoor dining can happen when we're at certain levels. We know that people who work in the Restaurant and Food Association food businesses have been able to be immunized and I know a lot of people have been immunized so we have that extra layer of protection now with case rates coming down."

If cases continue to trend down, Henry encouraged British Columbians to book a week-long holiday after the provincial restrictions are lifted on June 15.

Minister of Public Safety Mike Farnworth told reporters in a press briefing on April 23 that a $575 fine will be issued to people who contravene the order restricting non-essential travel in the province under the Emergency Program Act (EPA). The order has been extended and people from outside the province who are travelling in B.C. for non-essential reasons can be subject to the same enforcement measures.

Under the EPA, an order restricting non-essential travel between certain regions of the province remains in place until June 15 at midnight.