I've come across a ton of interesting scenes over the years in my Highlander Hybrid , writing this regular On The Road column presented by Toyota BC .
0
Jan 22, 2018 3:35 PM By: Bob Kronbauer

I've come across a ton of interesting scenes over the years in my Highlander Hybrid, writing this regular On The Road column presented by Toyota BC. One of my favourites is something I go back to often, found five years ago while on a road trip to Bodega Ridge Resort on Galiano Island.

This photo from 2013 is the first I captured of it. It's a fir tree "eating" a No Parking sign that some silly human attached to it. 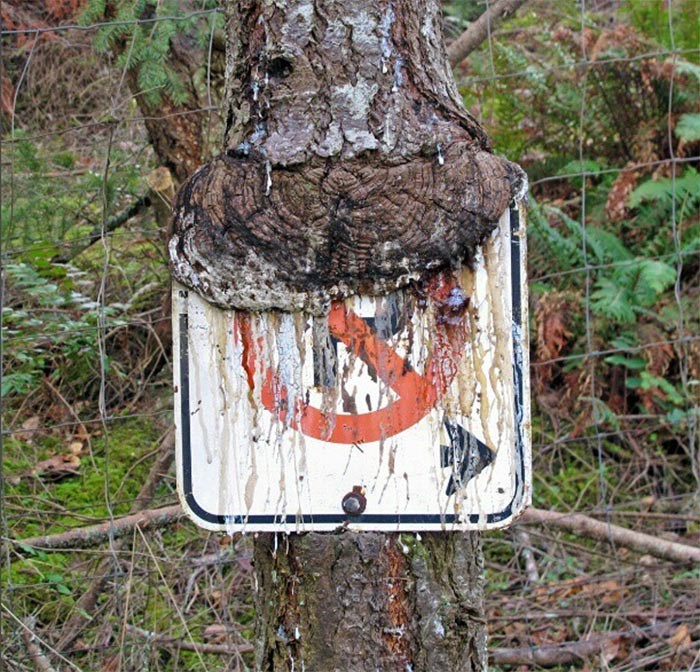 Located adjacent a public wharf at Retreat Cove, I've chronicled its progress over the past five years, capturing an image of it on most of my trips to this nearby Gulf Island. 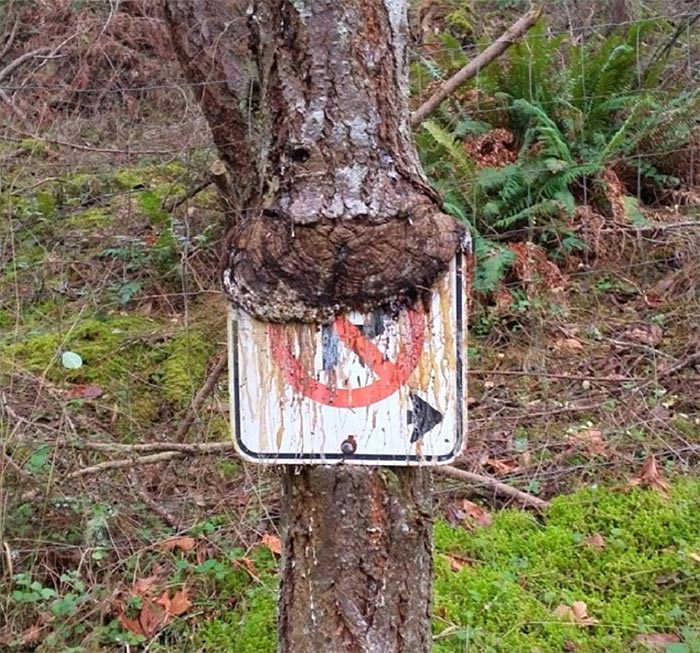 Last year the P was getting close to disappearing. 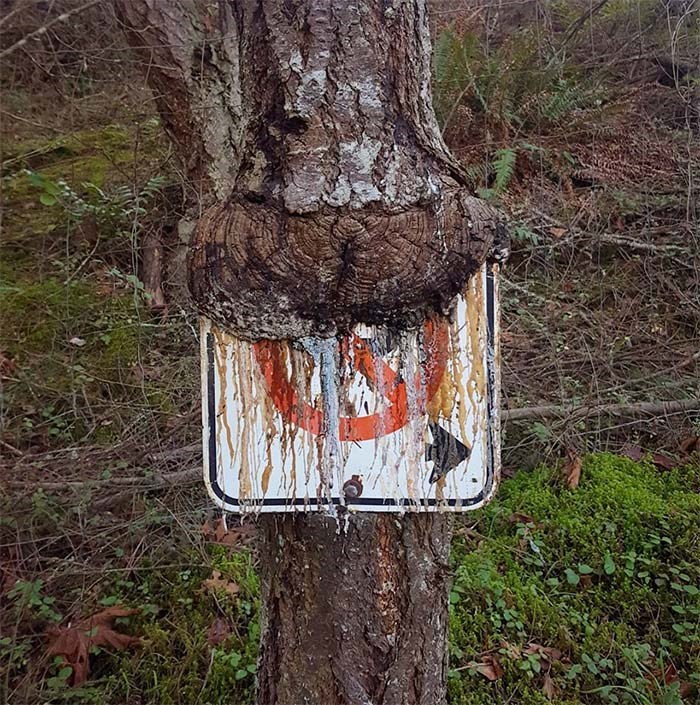 And most recently (one week ago) it appeared as though the P had almost said its final goodbye, being mostly covered in wood and sap. 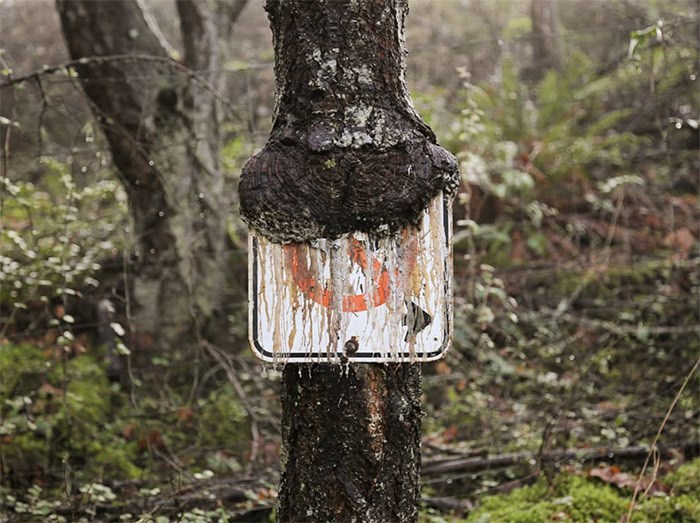 I reached out to UBC Forestry professor, Rob Guy, and asked how long he thinks the sign has been there. It's difficult to tell simply by looking at the photos but his guess is "roughly 35 years".

He told me that "The tree is basically repairing a wound, over many years. It’s the same process as when the scar from a broken or pruned limb is slowly covered over. Normally, after several years the wound is patched and eventually not visible from the outside. Not so easy with a sign, but if the tree lives long enough it may eventually cover it right over."

He also sent along two examples of this same sort of thing that he's captured in his travels. The one on the left (below) is on UBC campus and is a red alder that grew through a fence. On the right is a yew attempting to repair wounds caused by metal rods attached to a tree in Scotland. 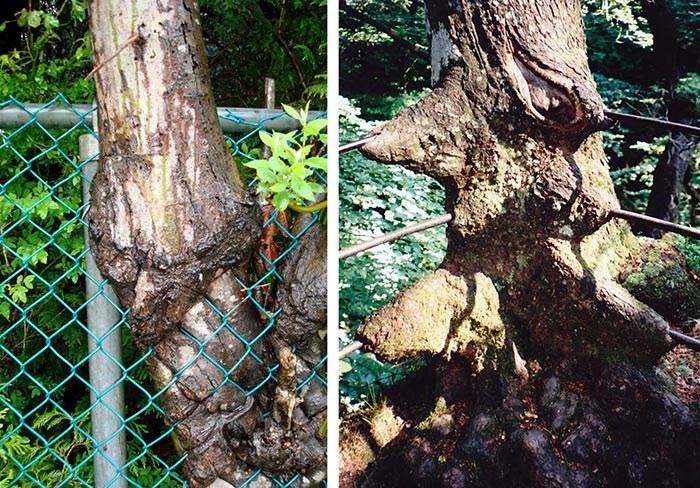 Trees being trees! Photos by Robert Guy at UBC Forestry

Things change pretty slowly on Galiano island, and I keep tabs on a few things there; while I've tracked this creeping fir tree VS No Parking sign I've also kept an eye on some old school green Rural Route mailboxes that were progressively getting more rusty and covered in rust since I first laid eyes on them.

To give you an idea of how slow things move on the island, the box on the left had a coffee mug with a spoon in it 3 years ago. It took a full year for someone to remove it. 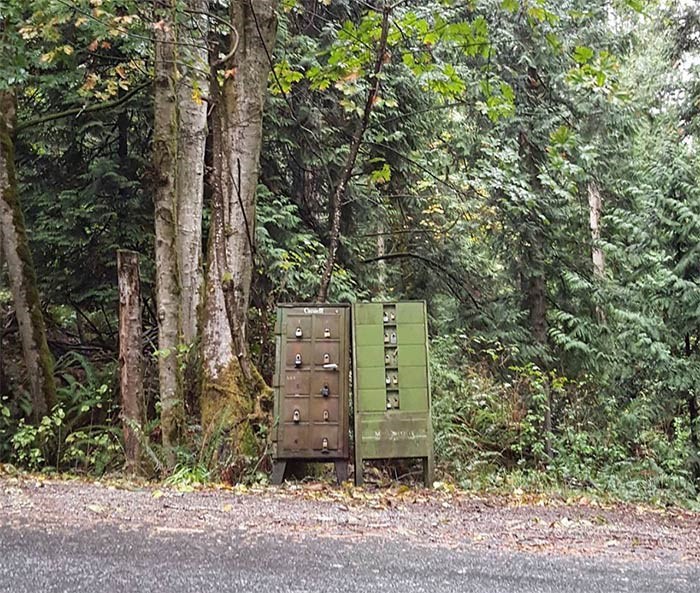 You can imagine my surprise when I noticed on our last trip that they'd replaced the old green boxes with the modern ones you see here. They're nice, but there was nostalgia wrapped up in the old ones, and I enjoyed chronicling them. 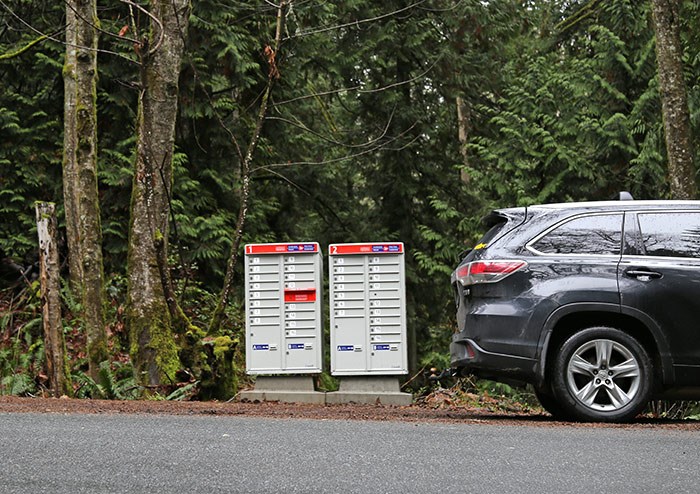 The new mailboxes, with my Highlander Hybrid competing for shininess.

Stay tuned over the next 5 years as I continue to bring you news of the tree-eating sign of Galiano Island! This story is not over.