The Vancouver trio biked through remote regions, along ridgelines overlooking fjords, up and over mountains, through glacier-lined canyons and across frozen, black lava fields.
Feb 22, 2020 3:06 PM By: Vancouver Courier 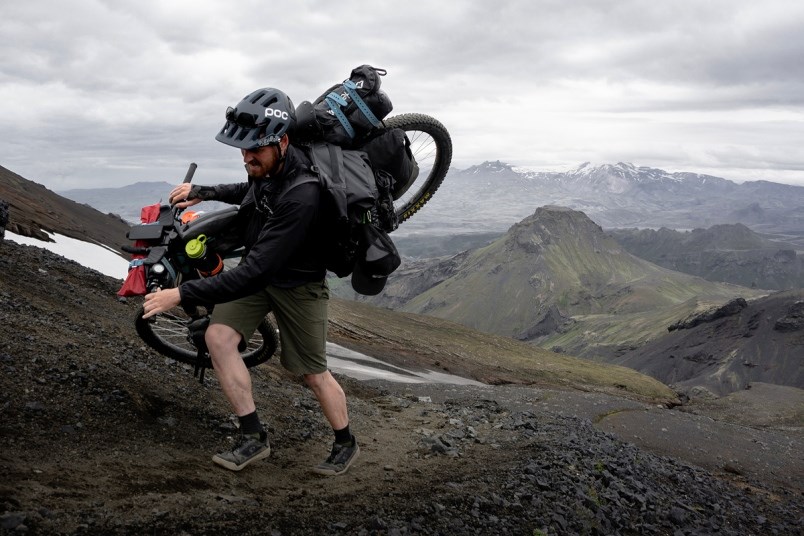 Oliver Jorgensen, Jalen Sekhon and Kieran Evans traversed Iceland on mountain bikes and produced a short film about their adventure, which will be screened at the Vancouver International Mountain Film Festival. Photo submitted

For three Vancouver millennials, biking across Iceland was a breeze — an incredibly strong, freezing cold breeze.

“It was almost comical, just how strong the wind was,” said Oliver Jorgensen, one of the cyclists. “It was difficult just trying to stay on the bike.”

Jorgensen, along with two friends, Jalen Sekhon and Kieran Evans, spent three gruelling weeks on a north-to-south traverse of the island nation in the summer of 2019. Their film, A Vacation Gone South, documented their journey and will feature as a part of their presentation at this year’s Vancouver International Mountain Film Festival.

“Jalen and I both ran track at SFU, so we had the endurance part down, but he was brand new to mountain biking, so he had a pretty steep learning curve,” said Jorgensen. “It was fun to watch him learning on the fly and taking a bunch of spills.”

The friends trained as much as possible before the trip, loading up their bikes with weight and making regular runs up Seymour Mountain.

The trip to Iceland provided Jorgensen with a chance to visit his ancestral home. “We started out in a town called Akureyri, where my family is from. It was really cool to immerse myself in the landscape and bike on trails that my ancestors would have herded goats on.”

Jorgensen was also chief navigator and the documentarian for the adventure.

“If Jalen’s learning curve was how to ride a bike, mine was how to use a camera, because I didn’t really read the owner’s manual,” said Jorgensen, who would typically ride ahead, dismount and shoot footage of his friends as they approached. “It’s funny that any time the weather got bad, we have zero footage. The camera wasn’t weather-sealed, so I just put it away, zipped up my jacket and hauled on. I just wanted to be done with the day and get dry again.”

The trio biked through remote regions, along ridgelines overlooking fjords, up and over mountains, through glacier-lined canyons and across frozen, black lava fields.

For Jalen Sekhon, many of the landscapes drew a close comparison to Tolkien’s Middle-earth. “In some parts, it’s like the Shire, with nice green pastures, but in other parts, it’s more like Mordor, with these desolate volcanic ash fields, where nothing could really grow.”

Supernatural mythology is right at home in Iceland; according to a 1998 national newspaper poll, more than half of the population believes in the existence of elves.

“When I was a kid, my mom’s aunt, Oli, was always telling me stories about elves. You really understand why when you get to Iceland, because of the sense of the unknown,” said Jorgensen. “Like when a fog rolls in off the ocean, and all of the sudden you can’t see 10 feet in front of you.”

The final leg of the trio’s journey followed Iceland’s most famous hiking path, the Landmannalaugar Trail. The route winds past the Eyjafjallajökull volcano, which last erupted in 2010, shooting volcanic ash kilometres into the atmosphere and causing massive disruption to European air traffic.

The epic trip ended with one final test.

“Basically, it’s a hiking trail, with lots of steep climbing, it’s not really meant for bikes,” said Sekhon. “So we were in a situation where we had to carry our bikes and they were all loaded up with gear, so they weighed like, a hundred pounds.”

“If you know Lord of the Rings,” said Jorgensen, “it’s like the staircase up to the spider’s cave, kinda like that. Actually, you wouldn’t even call it a staircase. It was super sketchy.”

All three cyclists made it safely to the end and were greeted at the last campsite with applause from the hikers who had witnessed them carrying their heavy bikes. “It was like a hero’s welcome,” said Sekhon.

Once it was all over, Jorgensen seized the opportunity to rest up and start replacing the 15 pounds he lost from the weeks of physical exertion.

“After we finished in Reykjavík, all I wanted to do was eat,” he said. “Pretty much just French fries — salt and carbs and lots of beer.”

A Vacation Gone South screens Feb. 26 at the Rio Theatre as part of the Biking Around the World presentation at the Vancouver International Mountain Film Festival. Details at vimff.org.