Howard the Gnome, who was in need of a home, is heading south from where he currently stands on Vancouver Island.
Mar 27, 2019 8:05 AM By: Carla Wilson

Howard the Gnome, who was in need of a home, is heading south to join a collection of fanciful attractions at Galey Farms in Saanich.

The family of the late Ron Hale, who built the nearly eight-metre-tall gnome at Nanoose, unanimously chose Galey Farms out of five contenders. 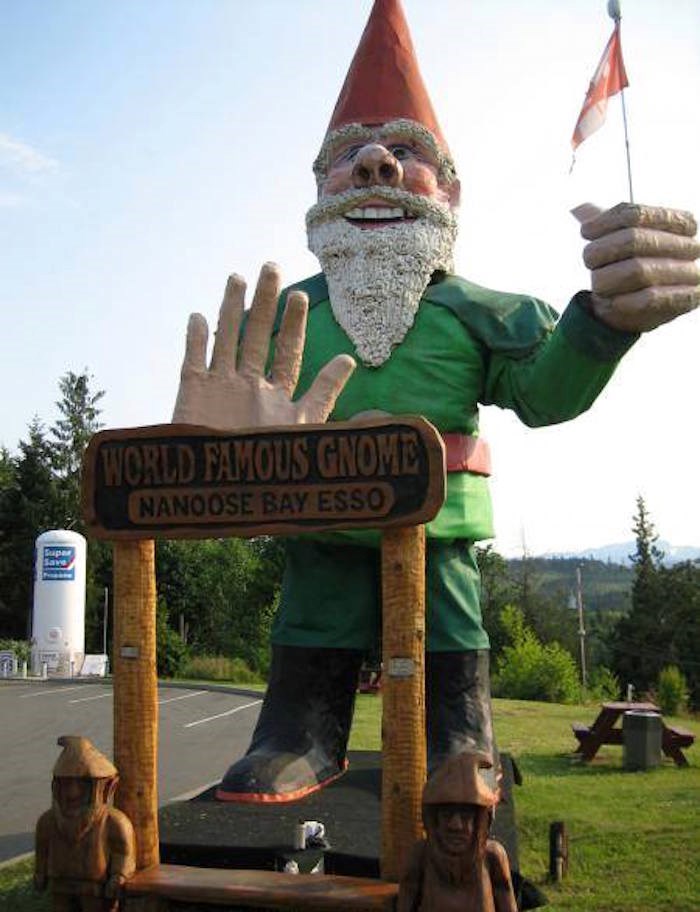 “We felt like it was going to be the best fit for him in terms of their ability to fix him and repair him,” said Bridget Matewish, Hale’s granddaughter.

The family also loved the Blenkinsop Road farm’s location and the fact that Howard would be seen by families, she said.

“We all had the same gut feeling that my grandfather would really like that location for him.”

Matewish noted that Galey Farms has a train that tours visitors through the property, similar to what the Hale family had.

She said the gnome was created more than 20 years ago to advertise the family’s now-closed family amusement park in Nanoose. It had been called Gnomeman’s Land and also had a small train.

Farmer Rob Galey will be heading to Nanoose shortly with the farm trucks to collect the gnome from its location at the side of the highway.

The figure was made in four parts: hat, head, upper torso and lower torso.

The gnome — dubbed the largest in the world by the Guinness World Records in 2009 — has to be moved from the Nanoose Bay Town Pantry and Chevron station. That land, including Howard, is no longer owned by the Hale family.

The Calgary company that owns the property told the Hales that the gnome had to be moved by the end of April or he would be demolished.

When the Hale family asked for help to find a new home for the Howard, close to a hundred offers were made.

A short list of five possible owners on Vancouver Island was drawn up.

Galey Farms is filled with a wide range of attractions, including a corn maze and models of a sphinx, a pirate ship, dinosaurs, and a patch of oversized fibreglass mushrooms.

It hasn’t been determined where Howard will be erected on the farm. A fence might go up around him, Galey said.

The plan is to bring Howard to the farm and figure out what needs to be replaced and repaired. It must be structurally sound to ensure it is safe, he said.

Galey’s plan is to give Howard the ability to wave.

The Hale family asked that the elf’s body colour remain the same and for a plaque commemorating Ron Hale, which Galey agreed to.

It is hoped that Howard will be in place on the farm, surrounded by mushrooms, by the fall.

Galey said that because the farm stresses education, he would like to add other extra-large features around Howard, including bees, insects and a hummingbird.

The farm will be preparing Howard for display during its busy planting time. Thousands of strawberry plants are on their way, carrots and potatoes have been planted and corn will be going in soon.

From Valleys to Vineyards: British Columbia’s Bountiful Playground
Jul 3, 2020 8:00 AM