The easy explanation for 2 Paycheques Away entails free haircuts and before-and-after photos of people on the Downtown Eastside who are trying to turn their lives around.
0
Sep 12, 2018 2:13 PM By: John Kurucz

Alysha Osborne was quite content to roll into her second decade as a barber at a swanky downtown shop, though a chance encounter in Gastown changed her life, her profession and her outlook.

Last summer, Osborne exited a cab and overheard an exchange between a homeless person and a random passerby. 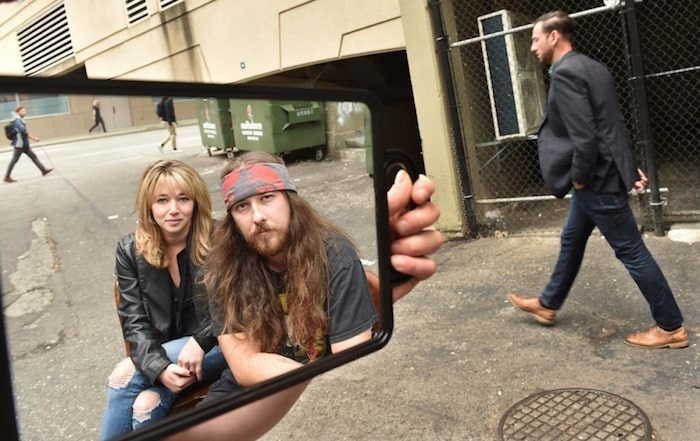 Alysha Osborne and Mihailo Subotic host a launch party for their book, 2 Paycheques Away, Sept. 23 at the Penthouse. Photograph By Dan Toulgoet

“The woman told this homeless person to f*** off and get a job. Then she started laughing,” Osborne recalled. “At what point did we to get this place in society where you can say something like that and then laugh at it and think that’s totally OK when it comes to a stranger?”

Heated words were exchanged before Osborne resolved to do more. She’s now a quasi-crisis counsellor, advocate and philanthropist through a non-profit she’s established called 2 Paycheques Away.

The easy explanation for 2 Paycheques Away entails free haircuts and before-and-after photos of people on the Downtown Eastside who are trying to turn their lives around.

The real-life, after effects go much deeper.

“You see it in the photos — we don’t ask them to smile or pose or do anything,” Osborne said. “All the after shots you see with everybody smiling is all natural. It’s a sense of confidence.”

Alongside photographer Mihailo Subotic, Osborne is now realizing her project in print form with the release of a 36-page book documenting more than a year’s worth of those haircuts and experiences.

Angie is from Six Nations, Ont. She moved here a few months ago to join 2 of her brother to try something new. The programs on the DTES have been helping them get set up. "My mom's Cree and my dad's Mohawk so we're just a bunch of Creehawks" #2paychequesaway #yvr #nonprofit @workinggear @barberandco #haircuts @snapeditshowphotography #giveback #DTES #fauxhawk #change #hair #vancouver

The book will be released Sept. 23 and includes before-and-after shots, biographical info on the photo subjects and details of the roughly 25-minute conversations that take place during each encounter.

All in, the pair have helped about 200 people — mostly men — in the last year, while about 60 agreed to be in the book.

“Some people didn’t talk and some people gave us one-word answers, which was fine,” Osborne said. “I didn’t push it. It’s like anyone, if you ask them a question about themselves, they like to talk. There was only two or three of them who said ‘no comment.’”

Subotic and Osborne do their handiwork in a small, windowless room out of Working Gear, a volunteer-led organization near Oppenheimer Park that provides clothing and other resources to men re-entering the workforce. Most of the barber gear has been donated by Osborne’s workmates at Barber & Co.

“Imagine being in that headspace — you need a job and then you finally get one, then you get all this stuff for free, and then you get a haircut and then get your photo taken,” Subotic said. “It’s a huge upswing in that brief moment because you wouldn’t be there unless you were taking a big step forward.”

Few commonalities link the many photo subjects together. A lot of what precipitated their lives on the Downtown Eastside is circumstantial: family supports fell apart, drugs and alcohol enter the picture and the roofs over their heads are suddenly gone.

The book’s title hones in on the very real precipice many Vancouverites straddle, in that two missed paycheques could result in disaster.

“A lot of these stories all started over some sort of trauma,” Osborne said.

It’s a trauma Osborne has lived with most of her adult life. Her stepmother died in the Downtown Eastside in 2010, after a life that included addiction and prostitution.

Her stepmom came to mind when compiling the book, but that’s not her target demographic.

“The idea that you can walk up to someone and tell them to get a f***ing get a job and walk away, that’s who this book is for,” she said.

The launch for 2 Paycheques Away runs from 4 to 9 p.m. at the Penthouse on Sept. 23. Tickets are $10 and available online via eventbrite.ca.