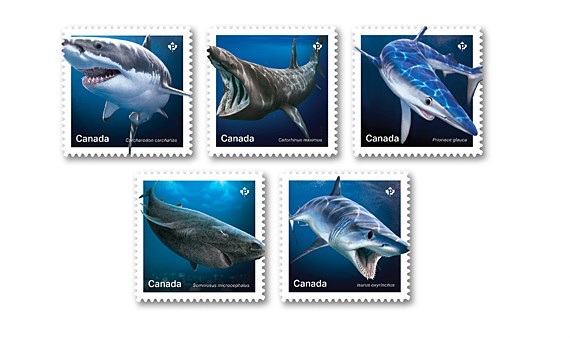 Experts with the Vancouver Aquarium worked with Canada Post to select the five iconic sharks featured in the collection out of about 30 species of shark that frequent Canada's coastal waters.

The endangered white shark or "great white shark" lives in Atlantic water making occasional visits to the B.C. coast travelling as far up as Haida Gwaii when the water is warm.

Great white sharks can live for up to 60 years and eat a variety of fish, marine mammals, birds and reptiles. Humans are the shark's most significant predator, taking them as sport fish, commercial bycatch, and for international trade of their valuable body parts.

The basking shark is native to Canadian waters and can grow up to nine metres long. Basking sharks eat by filtering plankton and other organisms from the water that flows through their mouth and over their gills.

The Committee on the Status of Endangered Wildlife in Canada (COSEWIC) has classified this species as endangered in the Pacific region and as a special concern in the Atlantic.

Blue sharks are common and found in the Atlantic, Pacific and Indian Oceans. In the summer, blue sharks can be found off the west coast of Vancouver Island and off the coast of Nova Scotia and Newfoundland. They eat fish, squid and sometimes seals and thought to live for about 20 years.

The Greenland shark lives in the cold waters of the North Atlantic Ocean but is sometimes caught by fishermen near the mouths of rivers such as the Saguenay River in Quebec. They are poisonous to eat unless prepared properly and can live for over 400 years.

Shortfin mako sharks are the fastest sharks on earth reaching speeds of 50 km/h or more. They prefer warmer waters but can be found seasonally in the Atlantic Ocean along the continental shelf of Nova Scotia and into the Gulf of St. Lawrence.

The sharks on the stamps were designed Andrew Perro in Toronto and illustrated by Julius Csotonyi in Winnipeg, Manitoba.

The Vancouver Aquarium's curator of propagation Danny Kent and curator of fishes Lee Newman along with Warren Joyce, Aquatic Fisheries Technician at Fisheries and Oceans Canada’s Bedford Institute of Oceanography suggested which sharks to feature and helped advise artwork creation.