For the second time in less than a year, Victoria’s police chief has popped someone for allegedly tossing a lit cigarette out their car window.
0
Jun 10, 2019 7:28 AM By: Times Colonist

For the second time in less than a year, Victoria’s police chief has popped someone for allegedly tossing a lit cigarette out their car window.

Smoking a cigarette in the car/Shutterstock

The incident happened about 6:20 p.m. Saturday, June 8 on Highway 17 near Quadra Street, according to a partial picture of the ticket that Manak posted on Twitter.

“575 reasons to not throw your lit cigarette out the car window in front of @vicpdcanada,” he wrote. “Happened in front of me on the [highway.]

“When asked why, driver replied, ‘I didn't want my car to burn,’ as he pointed to his cup holder in console. My response, ‘Then don't smoke in your car.’”

One person, however, was less impressed, referring to such fines as the “stupidest tickets ever.” 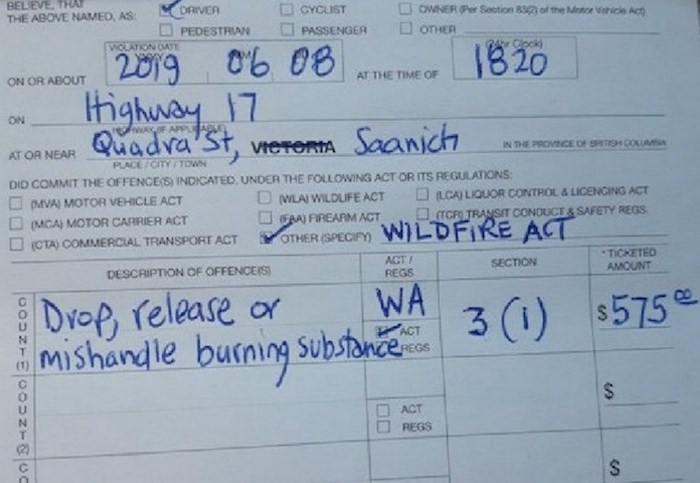 “Not buying it,” Manak replied. “I don't set the prescribed fine amount and I actually did use some discretion. I could have also written him a $138 speeding ticket.

“I was polite and respectful and he got the ticket he deserved [including] some education on how wildfires can start. End of story.”

It’s the second time Manak has highlighted the issue on social media.

Last September, he took to Twitter after pulling a driver over for tossing out a lit cigarette at a traffic light and then speeding away.

In that case, Manak said he gave the driver a break by writing a $138 speeding ticket and an $81 ticket for littering, instead of the stiffer $575 penalty under the Wildfire Act.