A few campers remain on Strathcona Park's west side after deadline 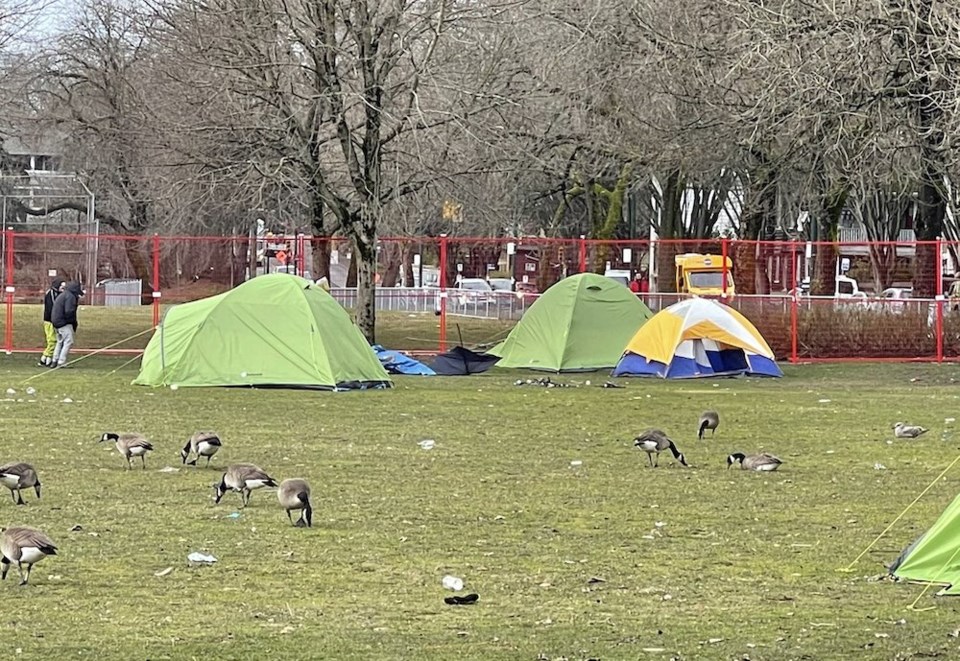 BC Housing says multiple residents of the Strathcona Park encampment have been moved indoors. Photo via @dave_pasin / Twitter

BC Housing says multiple residents of the Strathcona Park encampment have been moved indoors.

Mathews says Vancouver Park Board and BC Housing staff, together with its outreach team, have been working with people camping in the 16 structures on the west side of Strathcona Park to ensure they are either accepting indoor accommodations as they come available or move to the other side of the park. Ultimately, she says the goal of both the City and the Province is to move "anyone experiencing homelessness in Vancouver into long-term, sustainable housing to break the cycle of homelessness."

On Feb. 18, Matthews said a total of six people had moved indoors and a further four were anticipated to move indoors by the end of the day. "Those who have expressed an interest are being moved into indoor accommodations."

For the remaining people on the west side of the park, outreach is ongoing.

Vancouver Park Board and the Strathcona Park encampment

Jeannine Guérette,  a spokesperson for the Vancouver Park Board, tells V.I.A. that the Park Board is working with its City partners and BC Housing to bring the encampment in the park to a close and move people who are sleeping in the park into accommodation by the end of April.

"Renovations of a 60-bed shelter and other properties have begun, and these spaces will be activated to support people experiencing homelessness across the city once we receive confirmation of operating funding from the Province," she explains.

Last week, Donnie Rosa, General Manager of the Vancouver Board of Parks and Recreation issued a GM Order, effective Feb. 10, that that temporary shelters and structures will not be permitted in the west side of Strathcona Park to allow for the remediation of the space to return the area to recreational use and programming for all park users.

"Over the last week we have moved eight people from the west side of the park and anticipate relocating four more by Monday," she adds.

Once people have been relocated from the west side of the park and structures have been taken down, staff from the Vancouver Board of Parks and Recreation will erect a fence barrier to close off portions of the west side temporarily for remediation, explains Guérette.

While the Park Board expects this work will take approximately two to three months in total to complete, the community will still be able to access the park during this time.

Some locals have also taken to Twitter to share images of the park after the Wednesday deadline.

10am deadline have arrived. Majority of tents are gone from the west side of Strathcona Park. Only four tents remains. @CTVVancouver @CityofVancouver @ParkBoard @VancouverPD pic.twitter.com/W7cgWXRoZ8

@ParkBoard @CityofVancouver @kennedystewart @JohnCCoupar @TriciaBarker49 @steeletalk FYI new taller fencing + old fence being delivered to Strathcona Park that divides the park in ~1/2 why are paying for yet more taller fencing? So everyone is in same side? pic.twitter.com/HKZMDjAZMu