A Richmond family is speaking out after they say their sons’ tormenter showed up to their elementary school wearing a pink shirt on Pink Shirt Day.
0
Feb 21, 2019 1:16 PM By: Megan Devlin

A Richmond family is speaking out after they say their sons’ tormenter showed up to their elementary school wearing a pink shirt on Pink Shirt Day. 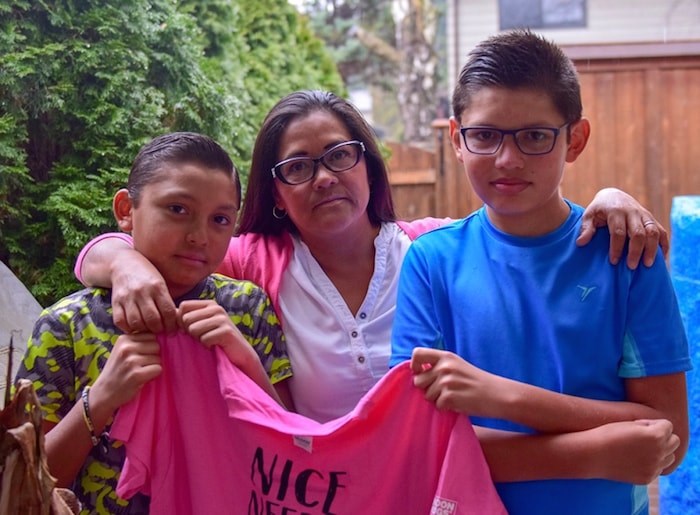 “We had so many nights without sleeping,” Torres Piña said. “The environment was very hostile.”

Then, when Pink Shirt Day rolled around, the family was shocked by the bully’s choice of attire at the school’s annual anti-bullying assembly.

“He showed up to school wearing a pink shirt that day,” Torres Piña said.

Christian, the boy’s primary target, was struck by the irony.

“I was pretty mad about it,” Christian said. “He’s not protesting against bullying—he is a bully.”

Torres Piña and her husband, Ian Higgs, met with Christian’s teacher and principal multiple times that year to address the bullying issues, they said. But they weren’t convinced the school was doing enough to resolve the issue, and told the News they felt the bully student was not facing repercussions for his alleged actions.

“I think the pink shirt campaign becomes meaningless when people are not accountable for their actions,” she said.

“Awareness cannot only be one day like Earth Day or pyjama day. It’s just not meaningful. It has to be reinforced every day, to be kind.”

David Sadler, spokesperson for the Richmond School District, couldn’t speak to specifics of the family’s case, but said the district has dedicated staff on an area counselling team whose job it is to address bullying.

They provide lessons to teachers on peaceful problem solving and what students should do if they’re receiving unwanted attention. The goal is to build social skills and resiliency in students, and develop school-wide expectations for behaviour.

Sadler said they can also implement Positive Behavioral Interventions & Supports (PBIS) in schools. According to its website, PBIS is “a proactive approach to establishing the behavioral supports and social culture needed for all students in a school to achieve.”

Plus, he added teachers have access to even provincial resources through the Expect Respect and a Safe Education (ERASE) website.

After the bullying issue in Grade 4, Christian’s family decided to homeschool him beginning in Grade 5. Torres Piña said his anxiety is much better, and he’s more confident.

Christian has some advice for other kids who may be being bullied:

“Don’t worry, there’s always the light,” he said. “If the darkness keeps coming, look for the light.”