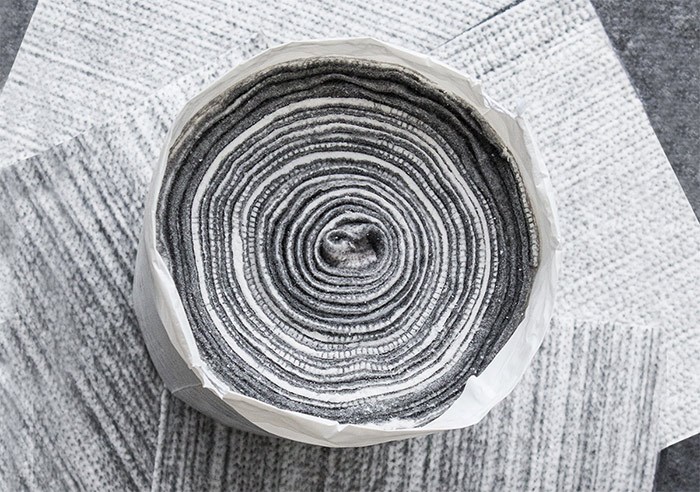 One of Activated White’s products, the ‘Wow roll’ is shown. Photo wetoilwonder.com

As the B.C. government conducts another public engagement exercise on how to respond to oil spills, a clean-tech startup from Sudbury, Ontario, says its new product can clean up oil and fuel better than anything else on the market.

The company, Activated White Ltd., has developed an open-cell polymer resin that has a number of potential applications, from water filtration to odour reduction. But the company thinks its best path to commercialization is in oil spill response.

It arranged to demonstrate the new product March 19 for the Western Canada Marine Response Corp. (WCMRC), the industry-funded company responsible for oil spill cleanups on the B.C. coast, and representatives from companies such as Shell and Kinder Morgan (NYSE:KMI).

“It has such a magnetic effect that it actually pulls the oil right to the centre of the boom,” Reich said. “You can actually absorb and then squeeze out a large amount of the hydrocarbon that you picked.”

For oil spill cleanups, the product would be deployed in booms, pads and powders.

The resin is biodegradable and contains nitrogen, which is a food source for bacteria. So even if some of the product is left in the water or in soil, it will work to attract bacteria that naturally consume oil.

“If anything’s left out in water, in nature it will enhance the natural biodegradation of the oil,” he said.

For B.C., the billion-dollar question is whether the the product, marketed under the name ActivatedWhite, would work to suck up diluted bitumen (dilbit). The biggest concern over the expansion of Kinder Morgan’s Trans Mountain pipeline in B.C. is that it could result in a dilbit spill at sea or in rivers.

“It does work on dilbit,” Reich said. “We have Environment Canada testing of our material with dilbit, and weathered dilbit as well. We supersede any other product out there. And it is being tested right now by Environment Canada again and the results should be out any time.”

Michael Lowry, communications manager for WCMRC, said the demonstration taking place March 19 is something the corporation does on a regular basis, as it looks for the latest high-tech approaches to preventing and responding to oil and fuel spills on the water.

“Over the last couple of years we’ve been really looking at technology that cuts down response times and improves the efficiency of the response overall,” Lowry said.

The company has invested in forward-looking infrared cameras, for example, that allow spill response teams to see fuel spills at night or in heavy fog and rain. Some of the cameras are attached to tethered blimps that can give response teams a bird’s-eye view.

The WCMRC has also invested in applications that identify some 400 environmentally or culturally sensitive areas in B.C. This allows response teams to use appropriate geographic strategies.

The WCMRC has also invested in six “current-buster” systems developed in Norway, at $500,000 each. These booms are designed to plow through water at much quicker speeds than traditional booms.

“Typically when you’re doing a spill sweep you’re going quite slow – maybe 0.5, 0.6 knots,” Lowry said. “With these new skimming systems we can go 10 times that speed.”