Photo Melissa Shaw Activists are calling on the B.C. government to let licenses for 20 fish farms in the Broughton Archipelago expire on June 20.
0
Jun 13, 2018 2:55 PM By: Melissa Shaw 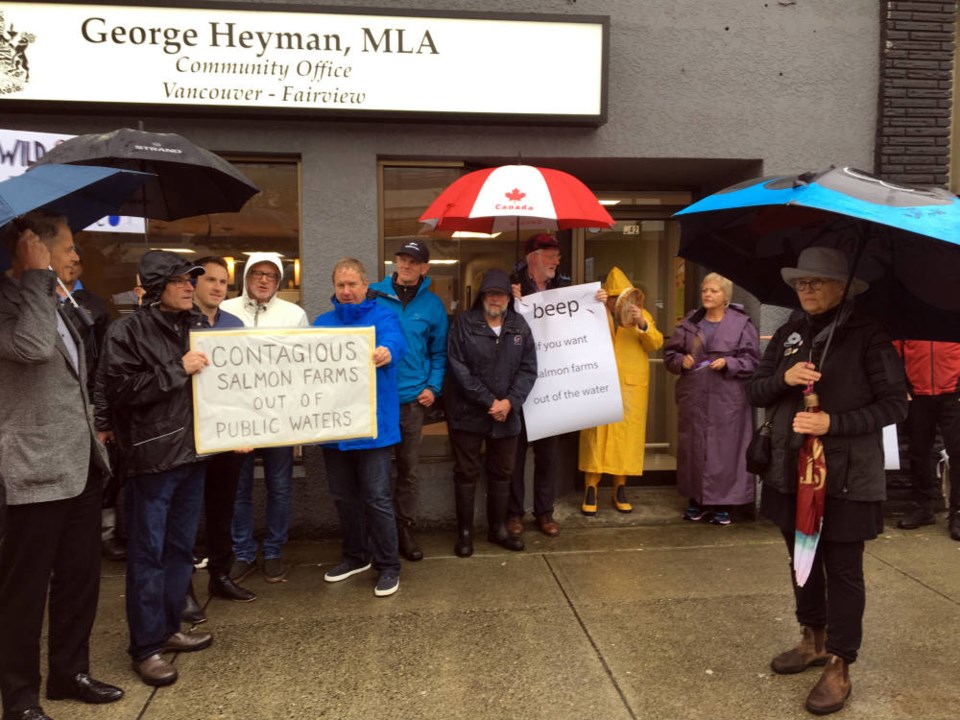 Activists are calling on the B.C. government to let licenses for 20 fish farms in the Broughton Archipelago expire on June 20.

A group of about 50 people gathered in the rain outside Environment Minister George Heyman's constituency office on June 13 holding signs with messages like 'save our salmon' and 'wild salmon don't do drugs.'

This is an opportunity for the provincial government to say 'we want to protect wild salmon' for First Nations, coastal communities and the environment," says Christianne Wilhelmson, executive director for the Georgia Strait Alliance.

A protest against fish farms outside of Environment Minister George Heyman’s constituency office in Vancouver pic.twitter.com/1ArwpeR013

Wilhelmson says open net-pen fish farms transmit diseases to wild salmon. "We actually know some of the diseases are harming Chinook salmon, which are key to the survival of southern resident killer whales."

In April, over 50 B.C. chefs signed an open letter to Doug Donaldson, Minister of Forests, Lands, Natural Resource Operations and Rural Development and Minister of Agriculture Lana Popham urging them not to renew or issue fish farm tenures.

The letter signatories asked the government to incentivize the transition away from open net-pen fish farms to closed containment farms either in the sea or on land.

"We are hoping that the federal and provincial governments will cooperate to create new legislation to encourage and assist salmon farmers to move out of open net-pens and onto land,"  says Karen Wristen, executive director of the Living Oceans Society.

The environmental groups have also launched a petition asking the government not to renew the fish farm licenses that has over 14,000 signatures.

Salmon farming supports about 6,600 direct and indirect jobs in B.C. and about 20 per cent of the industry's workforce is of First Nations heritage, according to the B.C. Salmon Farmers Association.

Harold Sewid, Clan Chief and owner of Qwe'Qwa'Sot'Em Faith Aquaculture, which has a business agreement with fish farming company Marine Harvest, says “for the last 20 years, I have seen B.C.’s salmon farmers address any issues that have come up."

"They have taken care of our environment while providing our people with good jobs,” Sewid adds.

Environment Minister George Heyman responded in an emailed statement saying “we take very seriously the concerns expressed by First Nations and the public, as the protection of our waters and health of our wild fish stocks is paramount."

"In B.C., the primary regulator for open net pen Atlantic salmon fish farming is the federal department of Fisheries and Oceans. The Province is concerned about protecting wild salmon and the migratory routes that they use. Government is in discussions with the Broughton Archipelago-area First Nations to reach a resolution regarding open-pen fish farms in the region,” he says.