Work was halted at the Port of Vancouver in Washington by community members blockading a rail line that is transporting pipe for the Trans Mountain pipeline expansion project.
0
Oct 18, 2019 3:13 PM By: Chris Campbell 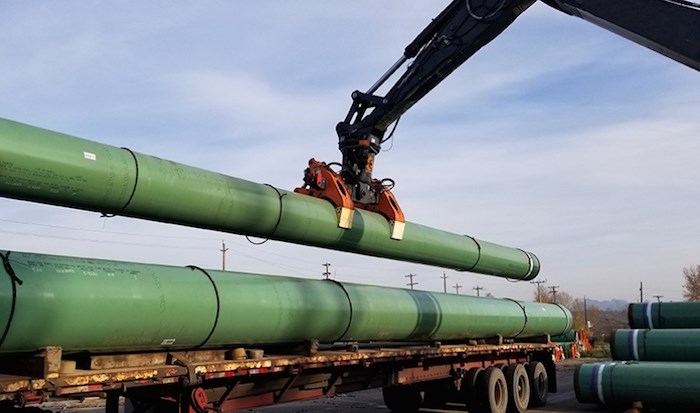 Activists in Washington state created a blockade as pipe was being loaded onto trains destined for British Columbia and the Trans Mountain expansion project. Photo via Trans Mountain

Work was halted on Thursday for six hours at the Port of Vancouver in Washington State by community members blockading a rail line that is transporting pipe for the Trans Mountain pipeline expansion project.

Yesterday’s action at the gates of Terminal 5 caused a major delay as pipe was being loaded onto trains destined for British Columbia, according to organizers.

“Trans Mountain poses a grave threat, not only to communities throughout the Salish Sea and interior Canada," said activist Nick Haas, in a news release, "but to the very stability of our global climate. We’re taking action today to keep tar sands in the ground.”

“We are standing in solidarity with the Indigenous tribes whose unceded territory is directly threatened by this pipeline route. We refuse to stand idly by and watch this machinery of destruction roll through our community unchallenged,” said activist Madeline Cowen.