The 'poor door' has raised controversies in neighbouring Vancouver and New Westminster.
Oct 15, 2020 7:41 AM By: Dustin Godfrey 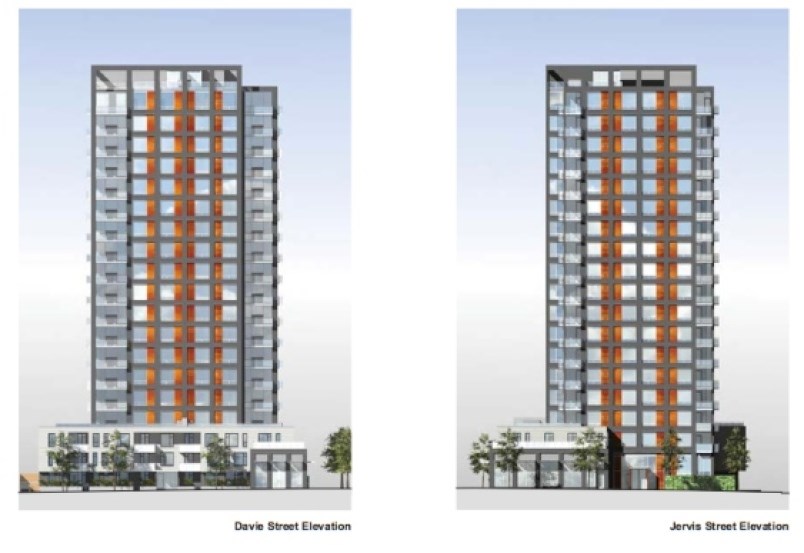 This tower approved for Vancouver's West End will have separate doors for social housing units and condos.

An advocate for people experiencing poverty and homelessness was given reassurances there likely won’t be any “poor doors” in developments approved for construction in Burnaby.

Angela Sealy, CEO of Westcoast Facilitators Group, in partnership with Atira Resource Society, conducted a public engagement in Metro Vancouver around so-called poor doors. The term refers to mixed developments that have separate doors in the same building for market units and non-market units.

Sealy recently presented the findings of her study to Burnaby’s planning and development committee. The engagement included an online survey and a virtual focus group, with participants from throughout the region.

The concept is one that hasn’t come to Burnaby so far, but the poor door has raised controversies in neighbouring Vancouver and New Westminster, the latter of which spurred Sealy to take action.

“The more people that talk about this, the better off for us to stamp out this – what I’m hoping is not a trend,” Sealy said.

Sealy’s survey saw 67 responses, which she said was not as many as she would have liked but was understandable given the context of the pandemic.

Among the respondents, 46 had “negative feelings” about the poor door concept and 27 outright disagreed with it, according to Sealy’s report, while only four respondents agreed with it.

“Even the people who had never heard of the poor door found it appalling,” Sealy said.

In essence, she said the poor door puts “a target on people’s backs,” because it segregates people into clearly defined groups.

“Let’s imagine raising children under that situation. You’re telling the children they’re not good enough. So it has far-reaching consequences,” she said.

In particular, she took aim at the perception that renters don’t take good care of the units they are living in.

“That is a generalized statement that does not have any value as far as I’m concerned,” she said. “There are millions of people that rent and take very good care of their place. For God’s sake, I’m one of them.”

She pointed, also, to the “horror stories” that come from condo developments – namely disputes between stratas and residents.

After her presentation, Sealy said she was assured by city officials that the poor door is not something that exists in Burnaby and likely will not in the future.

But while Burnaby doesn’t have any developments with segregated entrances, most of the city’s new projects – which are now mandated to include 20% “affordable” rentals – have a similar concept. Instead of including the 20% below-market rentals in the same building as the market condos or rentals, they’re put into a different building.

“That, to me, is still a bad idea, but it’s a lot better and a lot more inclusive than building one building with separate amenities, separate everything,” she said.

That’s because of the psychological impacts of having to go through the poor door every day, Sealy said, calling the poor door “deliberate but unintentional segregation.”