Alcohol a factor in Burnaby hit-and-run that killed cyclist

Alcohol was likely a contributing factor in a hit-and-run collision that killed a 53-year-old cyclist on Burnaby Mountain on Sunday, according to police.
0
Jul 3, 2019 7:16 AM By: Burnaby Now

Alcohol was likely a contributing factor in a hit-and-run collision that killed a 53-year-old cyclist on Burnaby Mountain on Sunday, according to police.

The cyclist, since identified by friends as engineer and father of two Charles Masala, was hit at about 1:30 p.m. while riding on Gaglardi Way. 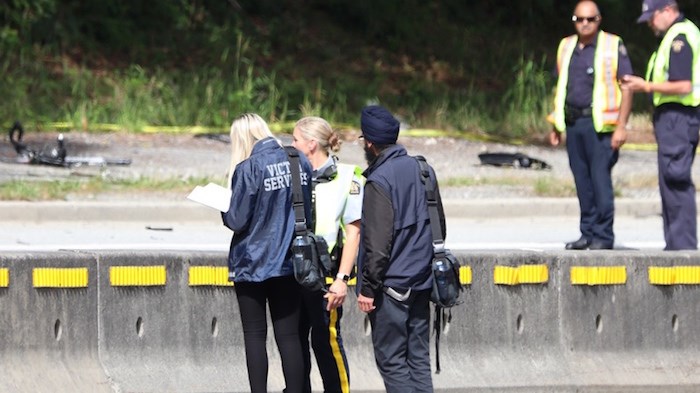 Police investigators on scene after a cyclist was struck by a driver Saturday afternoon on Gaglardi Way. The cyclist has since died. Photo by Shane MacKichan

He died at the scene.

The driver of a black Jeep Cherokee SUV suspected of hitting Masala did not stop at the scene but was located and arrested a short time later on University High Street and Tower Road, according to a Burnaby RCMP press release.

“It is early in the investigation however it is believed that alcohol was a contributing factor in this incident,” RCMP Cpl. Daniela Panesar said.

No charges have yet been laid.

Police would now like to talk to anyone who witnessed the collision or the driving behaviour of the Jeep before the collision. They would also like to hear from anyone with dashcam footage. Call Burnaby RCMP at 604-646-9999. To remain anonymous, contact Crime Stoppers by phone 1-800-222-TIPS or online.