B.C. is facing what some law enforcement officials have called a unique and unprecedented gang problem, including middle class kids lured by the lifestyle.
0
Aug 29, 2019 7:17 AM By: The Canadian Press 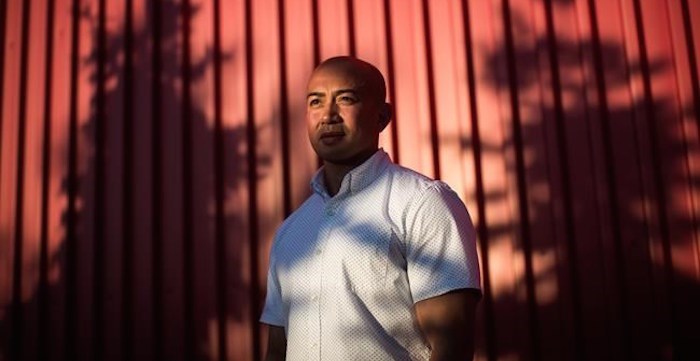 RCMP Sgt. Michael Sanchez, the officer in charge of the Surrey Gang Enforcement Team, poses for a photograph in Surrey, B.C., on Thursday May 23, 2019. THE CANADIAN PRESS/Darryl Dyck

But when he looks around some classrooms, he said there are already signs of kids glorifying what he describes as a "gang lifestyle." They wear clothes mimicking older kids who sell drugs and show no surprise when his team gives its presentation.

"When you see a young individual in Grade 7 already looking like that, that's alarming. I never thought we'd be delivering this content to Grade 6s and Grade 7s and that is actually our target now," Sanchez said.

British Columbia is facing what some law enforcement officials have called a unique and unprecedented gang problem. Unlike Los Angeles and Chicago where gang members are born into poor neighbourhoods with no other options, police say a large portion of B.C.'s gang violence is between young men who grew up in middle-class and affluent families.

It means the province is carving its own path as it tries to stop the trend without other models to follow.

"Assessment tools and other gang policies that exist out there, they're just not relevant to our experience," said Keiron McConnell, a criminologist and Vancouver police officer.

The result has been a patchwork of programs operated by non-profits, school districts, law enforcement agencies and others.

A task force on gang violence in Surrey found that while many promising programs exist across the province, they often operate in silos and with budgets that limit their effectiveness.

Targeting at-risk children under 12, as well as providing more culturally and gender appropriate programming, were among several recommendations it made last year.

The average age of a gangster on the Lower Mainland remains in the late-20s, according to the Combined Forces Special Enforcement Unit, the province's anti-gang agency.

But teens and young adults can be attractive partners for older, more entrenched gang members who may direct them to kill, in order to reduce the risk of retaliation and criminal charges, the task force found.

"Sixteen-year-old youth are particularly valuable since they have driver's licences," the task force report said.

That's why the Mounties are trying to get ahead by speaking with kids as young as 10 years old.

"Our hope is reaching out and understanding where the young people are at before they're introduced to those images or even the proposal that that lifestyle is good for them. We want to get the messaging to them early enough, so they have that education, they have the tools to make that decision right then and there," Sanchez said.

The Mounties started noticing a trend around the time that Sanchez joined the anti-gang unit a few years ago: The age of gang-related casualties on B.C.'s Lower Mainland was dipping into the teens.

Sanchez pins part of the downward shift on technology. The force monitors youth expressing themselves through open accounts online in ways that reflect the affluent gang lifestyles glorified in media and entertainment, he said.

"The gangs, they know this too. That's why I honestly believe we're starting to see that trend of getting much younger," he said.

Sanchez spoke outside a school in Surrey where the parents advisory council had organized an information night on the gang conflict. During his presentation, he showed social media images that had been shared with police, including photos of guns, drugs and money shared by high school students and a video of a group of teens beating up someone from a rival school. A gang member soon offered the lone teen "protection" as a gateway into the lifestyle, he said.

There's a reason emulation of the gang lifestyle seems to escalate around the beginning of high school, Sanchez said.

"If you think about it, the younger generation of parents want to be in contact with their kids," he said. "What do they give them? A phone."

Parents unfamiliar with the power of a phone, including all its apps, chat options, encryption and secret mode searches, can't keep up with what their kids are doing, he said.

Technology also poses one of the biggest challenges for law enforcement, as gangs are communicating more efficiently than ever before. Sanchez believes gang members instantaneously share information like which officers are on patrol and where.

"They monitor us. I really believe they study our patterns and the way we work just the way we study them, which we've never seen before. It's different, so we have to be a little wiser, a little more efficient to keep up."

Jordan Buna said he was firmly middle class or even upper class when he joined a gang in his late teens for what he saw as a career opportunity.

He played competitive hockey growing up in Surrey and had two parents who wanted to help him succeed in life.

But Buna, 35, said although he enrolled in college right after high school, he always struggled academically. He didn't believe he was capable of completing a degree and, feeling like there was no space for him on a traditional path to success, his sense of being directionless grew heavy and he became depressed.

When he was offered a chance to deal drugs, then run a dial-a-dope operation, it seemed like a rational move.

"That's the craziest part, you see it as a viable career option," Buna said.

Buna met the group of men who recruited him while working at a restaurant. They acted as though they were very interested in becoming his friend and projected a flashy lifestyle that he wanted to have too.

He believes his age made him attractive to the older gangsters who recruited him.

"They were cognizant of the fact that I was younger, they were showing me certain aspects of their lifestyle. In the gang world, there's nothing more that older, established people want than young members," said Buna.

A 2017 study by Public Safety Canada found there are no risk factors that uniquely predict a high probability of gang membership and no single variable account for such a complex phenomenon.

But while it could be easy to assume the middle-class young men joining gangs are making stupid or selfish choices, many seem to share Buna's sense of isolation and hopelessness. The province's anti-gang agency reports that many struggle with addictions and mental health, were exposed to domestic violence at home, or were bullied in school.

Getting out of a gang isn't easy. Once you're entrenched, a gang may not let you out, depending on the offences you've committed or know about.

Buna said he was lucky he was convicted of a firearms offence at 23. None of the "friends" he'd made checked in on him.

"It was there I started to realize I didn’t have anything," Buna said. "Prison is if you're lucky. Dead is usually the worse option and that's where a lot of young people find themselves today."

Some programs exist for gangsters ready to leave the lifestyle, including the anti-gang agency's Gang Exiting and Outreach Program. It provides counselling to target underyling issues like substance use and violence, supports for family and friends of gang members and practical support relating to housing, banking and skills training.

But the significant challenges to leaving is part of the reason programming is shifting toward elementary school kids, so they understand some of the risks before it's too late. Buna now works in anti-gang prevention and intervention programming for youth.

Ultimately, the strongest prevention and intervention seems to happen on an individual, case-by-case basis.

Sarah McKay, a former outreach worker who now helps run the Surrey school district's Safe Schools program, said she still remains in touch with the first high school student she worked with, who now has a burgeoning career in the trades.

"I was surprised by the amount of anger this young person had inside of them, the lack of trust," she said.

"But also, once we proved ourselves to be consistent caring individuals, how quickly they connected. These kids just need to feel cared for and supported and part of something. When they know we're proud of them, it goes a really long way."