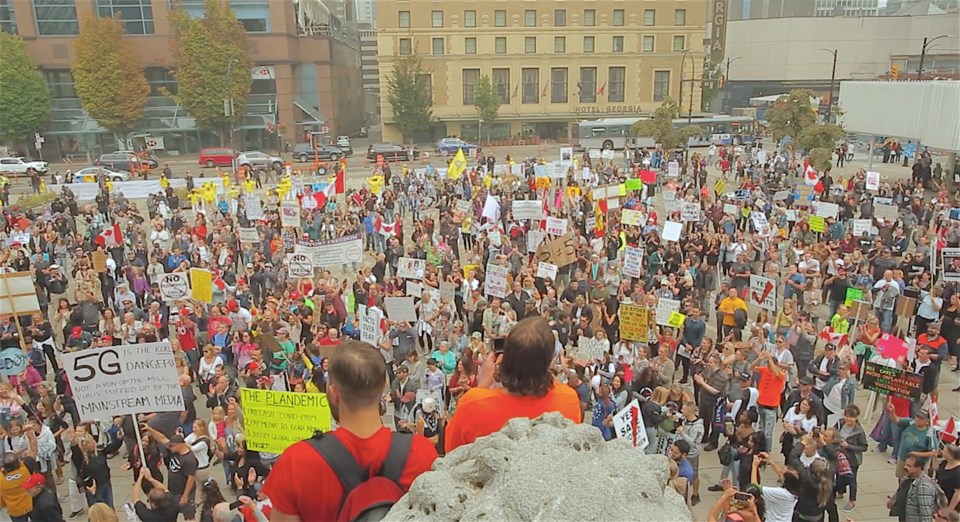 What saw several hundred protestors gather without face masks on the steps of Vancouver’s art gallery Sunday afternoon was christened by a local organizer as the “Vancouver Freedom Rally.”

The rally saw anti-mask advocates from Hugs Over Masks march alongside anti-vaccine advocates, 5G and QAnon conspiracy theorists, and members of a far-right group.

Signs were held, denouncing orders made by provincial health officials to help curb the spread of the coronavirus after its rapid spread led to a pandemic declared in March.

One of the protest organizers, Ryan Kulbaba, took to the microphone to address the crowd.

Early on in his rally speech, Kulbaba thanked the Vancouver Police Department (VPD) for acknowledging “[our] right to protest."

“They have been nothing but accommodating to us. They are here for our safety,” he said to the crowd, ushering in a large round of applause.

Kulbaba advocated for “informed consent,” so that British Columbians can ultimately decide whether or not they get a COVID-19 vaccination or wear a face mask.

“We shouldn’t be shamed for protesting our right to breathe oxygen,” Kulbaba said. "It’s our bodies and our choice.”

A similar protest erupted in Quebec, which saw crowds march through downtown Montreal Saturday, demanding an end to mask-wearing and other COVID-19 regulations.

At attendance in both cities were propagators of the QAnon conspiracy theory, which asserts – among other largely-discredited claims – that U.S. Democratic Party officials are trafficking children for sex.

At one point in the demonstration an upwards of 700 Vancouver protestors – according to a VPD tally – joined together in the singing of “O Canada.”

Anti-mask groups have held weekly rallies around Metro Vancouver but Sunday’s event was the largest demonstration yet.

Signs carried by protestors read “breathing is not a crime: end the masquerade" and “fear is the real pandemic.”

Written on another was: “I’d rather bury my family from COVID than see them enslaved to the fear of it."

Announced Aug. 21, VPD officers are now able to issue $2,000 fines to organizers of events with more than 50 people. They are also able to dole out tickets of $200 to individuals who are not social distancing.

"Police response at large protests needs to be measured and proportionate and each circumstance is different," Heer said.

"At this protest, police were not issuing fines and instead, were there to keep the peace and protect the public and protestors."

This is the first maskless protest of this scale in Vancouver since the police's new powers came into effect. 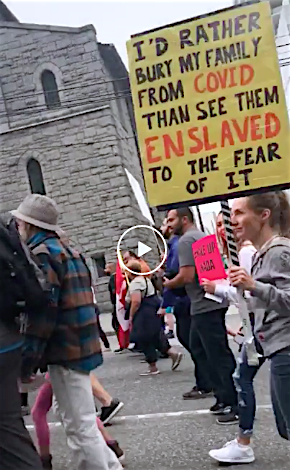