Black Shirt Day aims to recognize the struggle for civil rights fought for by black Canadians
Jan 13, 2021 10:24 AM By: Cameron Thomson 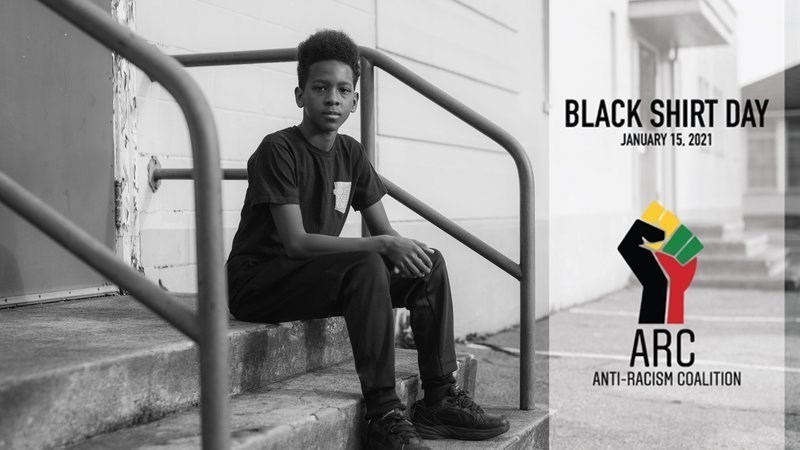 Theo Mogatas, 11, will be taking part in Black Shirt Day this Friday, Jan. 15 in hopes of raising greater awareness of the ongoing struggle faced by Black and racialized Canadians.Anti-Racism Coalition Vancouver

Proposed by the Anti-Racism Coalition of Vancouver, Black Shirt Day could become the next shirt-colour-themed awareness day in British Columbia.

Also known as ARC Vancouver, the coalition is a new grassroots organization that emerged in Vancouver from the Black Lives Matter movement.

ARC Vancouver is proposing January 15, birthday of civil rights leader Dr. Martin Luther King Jr., to be Black Shirt Day. The coalition's petition is directed to Jennifer Whiteside, B.C’s Minister of Education and according to ARC, Black Shirt Day would be created in recognition of the struggle for civil rights fought by Black and racialized Canadians.

While Black Shirt Day will not become officially recognized by the province in 2021 and ARC Vancouver devoted to it's official introduction in 2022, many in B.C. and around the world will be participating all the same.

Kamika Williams, chairperson for ARC Vancouver says school districts including New Westminster, Burnaby, Vancouver, Delta and North Vancouver have all signed on to participate. Outside B.C., the university of Calgary and some schools in Saskatchewan will also be participating.

"We're very excited about that honestly we really weren't expecting it to catch on this quickly," Williams said.

Black Shirt Day has also received international recognition with Understanding Europe Germany, a non-profit organization based out of Berlin posting about Black Shirt Day on their Instagram account.

In terms of the education on black Canadians throughout history, Williams would like to see that history be a mandatory subject in B.C. schools. Williams says that by the time Black Shirt Day comes around in 2022, ARC Vancouver will have a team of educators and will have developed a curriculum they will impart to students across the province.

Included in that curriculum will be discussions about racism, education on black political figures and leaders and how black people came to Canada and where they are now.

If approved in 2022, Black Shirt Day would join other days of awareness denoted by shirt colour like Pink Shirt Day, dedicated to anti-bullying and Orange Shirt Day to show solidarity with Indigenous victims of the residential school system.

“We believe this will be an important step in raising greater awareness of the ongoing struggle for civil and human rights faced by Black and racialized Canadians, and help to foster solidarity against all forms of racism and hate,” the coalition wrote on their petition page.

ARC Vancouver’s signature goal is 10,000, of which they have reached over half. ARC Vancouver asks that if you are interested in spreading the word about Black Shirt Day that the hashtag #BlackShirtDay be used.

In a statement sent from the Ministry of Education the ministry is aware of the petition but has not received a formal request from ARC Vancouver.

The ministry went on to highlight other areas where it is addressing anti-racism education in B.C. including the development of a K-12 Anti-Racism Action Plan expected to launch later this year.

“B.C.’s curriculum supports the teaching of Black history topics, such as the history of the trans-Atlantic slave trade and the Underground Railroad. But we understand there is more work to be done to ensure an anti-racism lens is core in B.C.'s curriculum." The statement goes on to say the ministry is working with representatives of the BC Black History Awareness Society to identify teacher and student resources.

The statement also announced the ministry of education will be launching an anti-racism awareness campaign as part of a recent $1.9-million investment to make B.C. safer and more inclusive.

“We’ve also expanded the Resilience BC Anti-Racism Network and increased support for community projects focused on addressing anti-Indigenous, anti-Black and anti-Asian racism. Alongside these initiatives, we will be introducing B.C.’s first anti-racism act and disaggregated, race-based data collection."