How much more would you pay for an apartment with a view?

Imagine paying five-times more per square foot for an apartment located mere minutes away from many other options?

According to a recent report, apartments on West Cordova Street in Downtown Vancouver can cost a whopping five-times more per square foot than those in other parts of Downtown.

Roomvu, a Vancouver-based real estate marketing and analytics firm, calculated the average price per square foot of every building in the downtown area. In order to do so, the firm analyzed data from sold units in Downtown apartment buildings in 2018 and through the first nine months of 2019.

The report showed that prices in the 10, 11, and 12 blocks of West Cordova Street can be as much as five-times higher than those on Barclay, Cardero and Harwood streets. Located minutes away from other streets, this section of real estate is a clear anomaly at $2000 to $3500 per square foot. Similarly, the price per square foot at Homer Mews (at the intersection of Homer Street and Beach Crescent), costs upwards of $2500 per square foot.

In contrast, the report found that the most affordable buildings are located in a stretch of Harwood Street and cost roughly $600 to $700 per square foot. 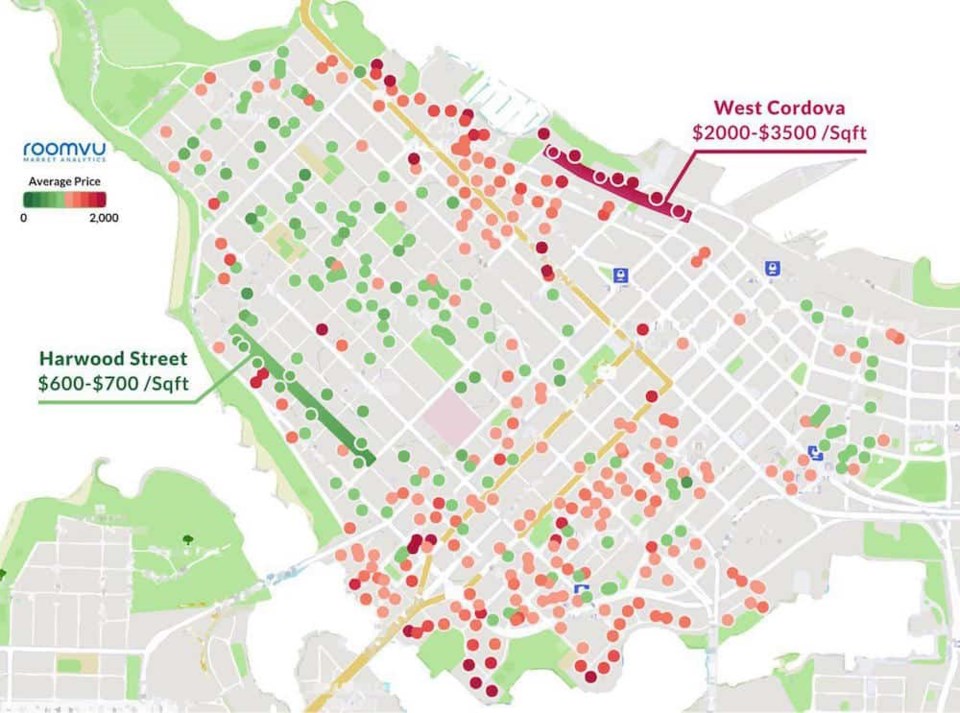 “The cost of living is expensive in Downtown Vancouver no matter how you slice it. But stunning views of the North Shore Mountains and proximity to Coal Harbour contribute greatly to the higher-price per square foot on West Cordova,” said Roomvu CEO and Greater Vancouver Realtor Sam Merhbod.

The report acknowledges that other factors contintribute to pricing such as what floor the apartment is located on, the age of the building, and the overall size. Regardless, the data indicates where prospective buyers are most likey to get the best bang for their buck.

“The south end of the West Side is generally where it’s most affordable to live,” noted Merhbod. “And given the proximity to beaches and amenities found in that area, it’s far from a bad place to live.”

Vancouverites can expect to pay substantially more for apartments with a great view. With one of the world's most breathtaking waterfronts, its safe to say that nearly everyone wants a piece of the pristine panorama from the comfort of their homes.