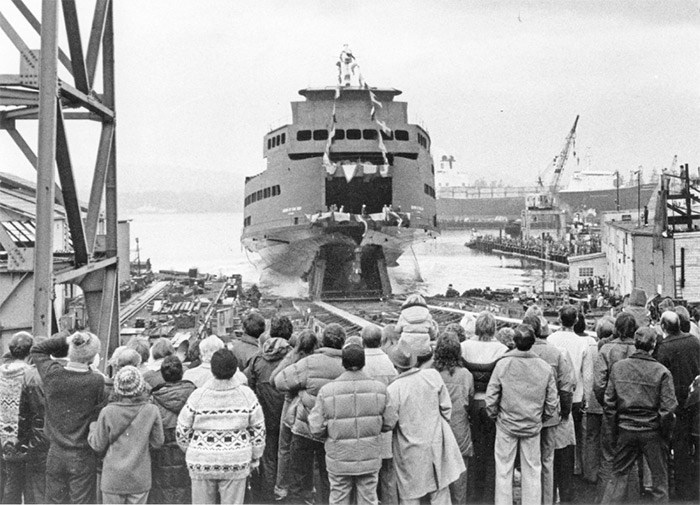 The Queen of Oak Bay drew a crowd in Victoria when it was launched Nov. 30, 1980, by the Burrard Yarrows Corp. Photograph By TIMES COLONIST

The company issued a request for proposals on Tuesday for naval architect engineering support to develop construction bid packages and to review proposals from shipyards.

This bidding opportunity is the first step in rolling out a new major-vessel construction bid package in the next couple of years, B.C. Ferries spokeswoman Tessa Humphries said.

“We don’t have a firm time line for the selection of a shipyard but it would follow the same process our other procurements do, with multiple steps,” she said in an email.

The five vessels would be replacements for the C-class ships, which were all built in B.C. Three were constructed in Vancouver and two in Victoria.

The first new vessel is expected to go into service by 2024, Humphries said.

Details such as expected costs are not available yet.

B.C. Ferries’ C-class is made up of Queen of Alberni, Queen of Coquitlam, Queen of Cowichan, Queen of Oak Bay and Queen of Surrey. All are 139 metres (456 feet) long. And all but the Queen of Surrey serve Vancouver Island, either at Departure Bay or Duke Point in Nanaimo.

Any construction plan is bound to reignite the decades-long discussion about where new vessels should be built. Unionized B.C. shipyard workers have consistently called for local construction to help support the province’s shipbuilding industry.

Chuck Ko, who heads Allied Shipbuilders Ltd. of North Vancouver, said it takes political will to see ferries built in B.C. “There’s no recognition of the social benefits of building ships in B.C.,” he said, adding such work would provide high-paying work.

Ko said he is unable to compete against high-volume Polish shipyards that pay workers lower wages. A Polish shipyard built the last batch of new vessels, the Salish class ferries.

As well, the federal government has decided to waive import duties on passenger vessels constructed overseas.

Further, the C-class ships are large and a vessel of that size would not fit in Allied’s yard. Allied would have to be part of a consortium that includes a firm with a larger facility in order to take part in construction of this magnitude, Ko said. He ruled out Seaspan’s Vancouver Shipyards because it is busy with existing federal contracts.

Queen of Cowichan serves the Departure Bay-Horseshoe Bay route. It has room for 312 vehicles and 1,494 passengers and crew members.

Queen of Alberni has capacity for 280 vehicles and 1,200 passengers and crew. It runs between Duke Point and Tsawwassen.

Queen of Coquitlam has room for 316 vehicles and 1,494 passengers and crew. It runs out of Horseshoe Bay, serving Departure Bay, and it also goes to Langdale.