A 90-year-old man stranded on a logging road in Pender Harbour for three days with minimal food and water was rescued after being discovered by two teenagers who were dirt biking in the area.
0
Oct 5, 2019 1:18 PM By: Glacier Media

A 90-year-old man stranded on a logging road in Pender Harbour for three days with minimal food and water was rescued after being discovered by two teenagers who were dirt biking in the area. 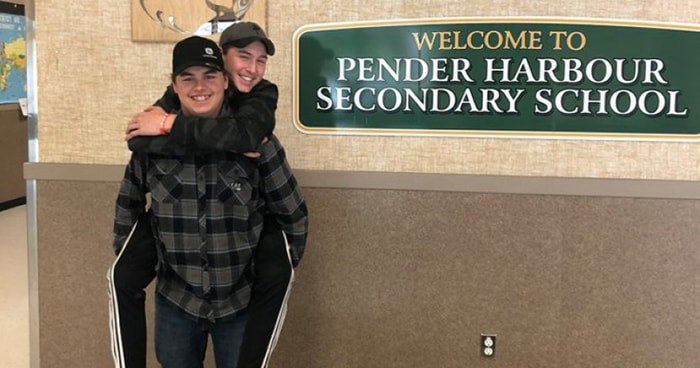 Jakob Thornton (front) and Nolan Johnston at Pender Harbour Secondary School the day after they discovered a 90-year-old man trapped in his car on a remote road in the area. – Chris Lekakis Photo

“Was I ever pleased to get out of there, I was so thirsty,” Paul Jones told Coast Reporter from his Garden Bay home after the Oct. 2 rescue.

Jones, an avid conservationist, drove up a logging road off Menacher Road on Monday afternoon to see whether the area was being logged, and to test how his recently purchased SUV would perform in the backcountry. It got stuck on the side of the road as he was returning from what was supposed to be an hour-long trip.

“It was a pretty precarious situation because I was on the edge of quite a big ditch,” said Jones, who moved to the passenger seat to keep it balanced. “That was the great danger, that it might roll right onto its side and I sure didn’t want that.”

Jones estimated he was eight kilometres up the road and decided to stay with the car rather than test his fate on the steep and rugged terrain. His only sustenance was a jar of cashews and half a bottle of water.

Thanks to a trip to the post officer earlier that day, he had “some reading materials to pass the time away” – including a copy of the latest edition of the Harbour Spiel.

By the second evening, Jones’ car battery died after he used the headlights to signal for help. He had a blanket and maintained good spirits, but knew “something quite dire could happen at night if I didn’t have anything to drink.”

“I was very worried about having to spend Wednesday night there without any water. I really was,” said Jones.

Nolan Johnston and Jakob Thornton, meanwhile, were dirt biking near Madeira Park on Wednesday evening when they decided to try a trail down Menacher Road. “We debated even going,” said Johnston, because it was getting dark.

As the 16-year-olds were biking, they spotted and approached the red SUV. Thornton peered inside and saw Jones in the passenger seat. “He wasn’t moving,” said Thornton. “I thought he was dead.” 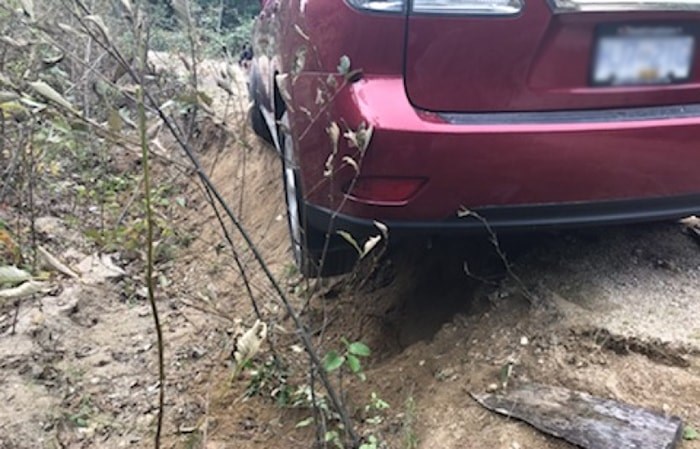 The SUV stuck on the side of a logging road near Menacher Road in Pender Harbour. – Submitted by Ruth Jones

But when they knocked on the window, Jones gave them a thumbs up, leading them to think somebody was already coming for him. As they walked to their bikes, they heard the man knock on the window so they returned and opened the door.

“He told us he’d been out here for three days with no food or water and he’s 90 years old,” said Thornton.

“He looked real pale and super weak and couldn’t really talk and couldn’t keep his head up,” said Johnston, who called 911 while Thornton searched for water.

While a creek rushed nearby, a cliff made it impossible to reach. Instead, Thornton drove his bike back down the road to some nearby houses and returned with water.

“I sure enjoyed that,” said Jones.

Several paramedic crews were dispatched after receiving the 6:40 p.m. call, including ambulance unit chief and community paramedic Cheryl Jensen, who arrived in her pickup truck, which proved essential to the rescue.

One ambulance attempted, but couldn’t make it all the way up the rough logging road. A helicopter was also on standby, while the paramedics, assisted by search and rescue, hiked through the rain in the darkness the rest of the way to the SUV.

“The big thing is just the team effort, right from the young boys finding him, calling 911 and how it played out,” said Jensen, who called it a “unique” rescue. “That’s the nice thing about remote and rural B.C. – a lot of the time in these situations with patient care and safety, we’re always thinking on the fly, we know our local resources.”

The paramedics arrived to find Jones in serious but not life-threatening condition.

They transferred him to the pickup truck, which was able to navigate the rough roads, and drove him to a waiting ambulance that transported him to Sechelt Hospital.

“Did they ever look after me. They gave me some sandwiches – a lovely sandwich supper that was very reviving,” said Jones.

Three pounds lighter and mostly recovered from the ordeal, Jones hasn’t yet met with the boys since the rescue, but said he hopes to have the “wonderful young lads” over for a meal soon.

Both boys told Coast Reporter from school the next day that they are still processing the experience, though Johnston had absorbed at least one lesson by then: “Try and stay as calm as you can possibly be. Try to think straight.”

As for Jones, next time he said he’ll leave a note.