On Tuesday evening, former president Barack Obama told some 3,500 business and community leaders gathered in Vancouver that the U.S.-Canada relationship should not be taken for granted.
0
Mar 6, 2019 6:44 AM By: Hayley Woodin

What happened: Former president Barack Obama spoke to a sold-out crowd of business leaders and guests in Vancouver on Tuesday evening.

Why it mattered: At the largest event in Greater Vancouver Board of Trade (GVBOT) history, Obama calmly made a case for western unity at a time when current U.S. policies have heightened global geo-political tensions. 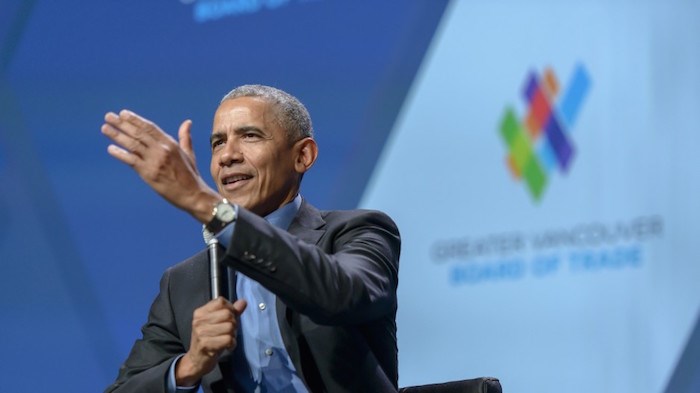 The Greater Vancouver Board of Trade hosted the 44th President of the United States, Barack Obama, in Vancouver on March 5, 2019. The event drew a sold-out crowd of more than 3,500 people to the Vancouver Convention Centre West for a moderated conversation between President Obama and the Board of Trade’s President and CEO, Iain Black. Photo via Business In Vancouver

On Tuesday evening, former president Barack Obama told some 3,500 business and community leaders gathered in Vancouver that the U.S.-Canada relationship should not be taken for granted.

“The point is, we should be friends and allies. And frankly, the nature of the tensions that exist between us are – on the scale of global politics – are insignificant," he said.

It was a digression in a discussion that largely veered away from current affairs.

While he made several remarks around the importance of facts – as well as the usefulness of having competent people in an administration – Obama did not single out nor directly mention current U.S. president Donald Trump during his time on stage. He did, however, mention Justin Trudeau.

He recalled his big argument with the Canadian prime minister.

"It wasn't even an argument. He was really pressed about timber agreements. And I'm like, 'Dude, I've got Syria,'" said Obama. "It's not India-Pakistan."

Generally, Obama highlighted the need for unity in the western world in the face of massive change: economic change, technological change, climate change. While it may have been a word that inspired hope during his campaign for office in 2008, the 44th president's reference to change in his hour-long on-stage discussion with GVBOT president and CEO Iain Black carried caution.

“I’m like an old fashioned guy. I believe the facts,” said Obama, before enumerating a list of climate change impacts the world has begun to see. Almost every mention of facts in his hour-long appearance generated a reaction from the crowd of B.C. business and community leaders.

“These changes are just beginning,” he said. “At some point things can start breaking down. And I don’t mean to paint this horrible, dystopian picture. These are just facts.”

Since retiring from high office as one of the youngest presidents to hold it, Obama told the audience he has spent much time reflecting on various issues, and what comes next.

He elaborated on two issues that will affect both the U.S. and Canada: inequality and climate change.

“I worry about the sustainability of the liberal democratic order,” Obama said, noting throughout his discussion that compounding inequality has led to political extremism in parts of the west.

He said inequality in access to healthcare – Obamacare remaining a highlight of his two terms as president – and in education and job security put at risk a world order he argues Canada and the U.S. have a responsibility to protect.

“In some ways Canada is ahead of the game on this,” he said, acknowledging the country's investments in healthcare and other social programs. “As a consequence, the centre is holding together.”

“This is an example where Canada has something to teach the United States.”