Bathtub races return to Vancouver for the first time since 1996

Loyal Nanaimo Bathtub Society Commodore Greg Peacock is ready to tub Photograph By DAN TOULGOET It’s not often you see Vancouver nick ideas from our neighbours to the west, but if there’s one thing Nanaimoites know, it’s bathtubs.
0
Jun 7, 2018 4:50 PM By: John Kurucz 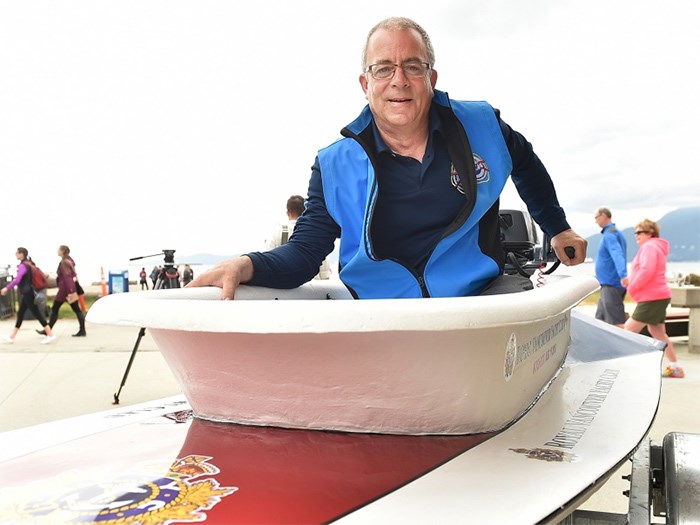 It’s not often you see Vancouver nick ideas from our neighbours to the west, but if there’s one thing Nanaimoites know, it’s bathtubs.

Indeed, fibre glass tubs and small outboard motors won’t be confined to the other side of Georgia Strait for the first time in 22 years when bathtub races return to Vancouver waters in mid-August.

Plans for hijinks on the high seas have been in the offing for the better part of a year, but were made official on Thursday afternoon near Kits Beach where the races will take place Aug. 11.

“There are a lot of people who remember the days of the bathtub races coming here from Nanaimo,” race director Jamie Pitblado told the Courier. “We’re bringing them back and people are really excited. And they get even more excited that it’s not the Nanaimo to Vancouver course, it’s going to be happening right off Kits Beach so they can come watch it all afternoon.”

The races will be the centrepiece of KitsFest, which runs Aug. 10 to 12. The one-mile race will see upwards of 30 tubbers speeding around an L shaped circuit near the waters off Kits Beach.

The races ran from Nanaimo to Vancouver from 1967 to 1996 and now continue off the east coast of Vancouver Island.

“As a kid I went over to Vancouver Island to Nanaimo and my cousin was on a team,” he said. “It was a bunch of his coworkers and some family members, they got together with a six pack, they went in their backyard and built a tub and hung an outboard motor off the back of it. They spent the winter doing it and they all got together and went out.”

The race stopped making the trek over to Vancouver in the mid ’90s largely due to safety concerns and financial reasons.

Safety concerns haven’t necessarily abated, as only three of the 38 registered racers finished last year’s event in Nanaimo. Ocean chop in the neighbourhood of 12 to 14 feet tends to do that to a small boat, but that’s not a concern in the Vancouver context.

All participants will be vetted for safety protocols and motors will be confined to kicking out 10 horsepower’s worth of pep or less. Pitblado said the event will happen rain or shine and organizers are studying tidal charts to make sure boats don’t run aground.

Some tricking and modifications will be allowed and Pitblado expects some of the vessels to top out at about 45 miles per hour.

“From a safety perspective, we have no concerns about being able to do this in any weather,” he said.

One of the more colourful mayors in B.C. history, Nanaimo’s Frank Ney was the skipper who initially made the boat float. He championed the first races in 1967 and this year’s event is dedicated to the original Nanaimo pirate on what would have been his 100th year of tubbing and landlubbing.

“That’s what makes bathtubbing bathtubbing — it’s a bunch of friends, they get together to build one of these things,” Peacock said. “You’ve got to remember it started for fun. It was a silly event.”

Registration for racers will be online in the coming weeks, and details will be posted online at kitsfest.com.