Despite an “historic” $1.3 billion loss at ICBC, and $3 billion in additional spending, B.C. Finance Minister Carole James said August 28 that her government still managed to stay in the black for the March 2017 to 2018 fiscal year. 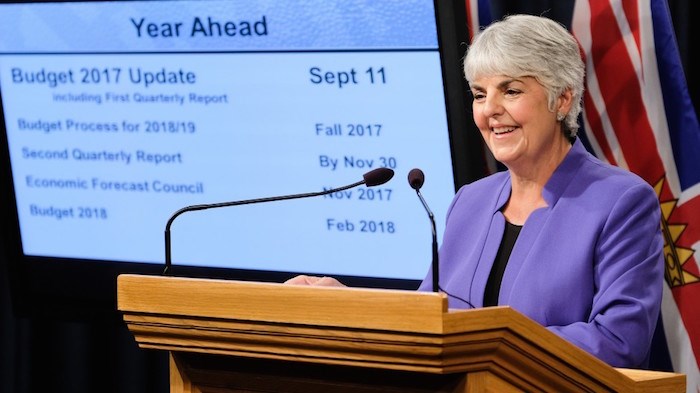 Photo via Business In Vancouver

“We are maintaining a balanced budget, we’re reducing our debt and we’re keeping our credit rating strong,” James said. “And we’re doing all of that while dealing with all of the challenges that were left from the previous administration, including the housing crisis, ICBC and money laundering.”

It also is whittling down debt, directing $950 million towards BC Hydro deferral accounts, and maintaining a relatively low debt-to-GDP ratio of 15.6%.

The use of deferral accounts by BC Hydro – pushing the revenue requirement for expenditures into the future – has been criticized for years by a number of auditors general. To address concerns with BC Hydro’s overuse of deferral accounts, the government is putting $950 million towards an adjustment. That essentially means that some future rate increases from BC Hydro have been covered by the taxpayer.

But that doesn’t mean ratepayers won’t get hit with future BC Hydro rate increases. There is still more than $5.45 billion in BC Hydro deferral accounts, so whittling those accounts down is a long-term project.

James said she has no problem with utilities like BC Hydro using deferral accounting, but that BC Hydro has been overusing it to the point where it puts the Crown corporation in danger of becoming financial unsustainable, like ICBC.

“That’s simply put off the problem to future generations and saying, ‘Everything looks good over here,’” James said. “Well, we’re not willing to do that. We believe we have to address those challenges…and that’s what we’ve done in this budget.”

On the operating side of the budget, the government increased spending by 6.2% ($3.3 billion) for things like health care, education, social services and fighting forest fires.