A strong Pacific storm has arrived with a mix of wintery weather including heavy snow, freezing rain, and blowing snow, warns Environment Canada.
Jan 18, 2020 9:54 AM By: Elisia Seeber 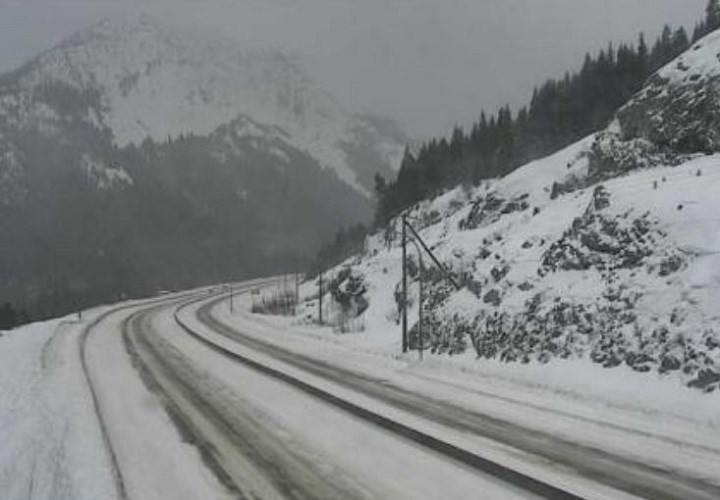 Freezing rain could fall on the Coquihalla Highway and Highway 3 during the weekend. File photo

Hazardous winter conditions are expected on a number B.C. highways this weekend, including the Sea to Sky and Coquihalla highways.

A strong Pacific storm has arrived with a mix of wintery weather including heavy snow, freezing rain, and blowing snow, warns Environment Canada.

A winter storm warning is in place for the Sea to Sky Highway from Howe Sound to Whistler with long periods of snowfall expected and possibly freezing rain.

"As warmer air associated with the storm penetrates the region, the snow will begin to transition to freezing rain over Howe Sound later today,” an Environment Canada alert states.

"Total snowfall amounts of up to 20 cm are expected for Squamish while the route north of Squamish will receive 30 to 40 cm by Sunday morning."

The weather agency says the strong storm system will also bring heavy snow to the Whistler area, with 15 to 25 cm expected by the end of the day and a further 10 cm likely tonight. There is also a slight risk of freezing rain overnight.

A winter storm warning is also in place across the Fraser Valley, including Chilliwack, Hope, and Abbotsford. Snowfall ammounts will range from near 5 cm in the west to 10 cm in the east.

Freezing rain could fall on the Coquihalla Highway and Highway 3 during the weekend.

Environment Canada issued a warning for the stretch of road from Merritt to Hope and Hope to Princeton, via Allison Pass, beginning Saturday afternoon and running through to Sunday.

"A strong storm system will bring snow to the Fraser Valley. Warm air aloft pushes inland that afternoon and freezing rain is expected for portions of the Coquihalla and the Hope Princeton Highways, near Hope," the alert states.

"Higher elevations of these routes will likely see a transition to rain showers late in the day on Saturday."

The weather agency recommended postponing non-essential travel until conditions improve, cautioning that rapidly accumulating snow will make travel difficult and visibility may be suddenly reduced at times in heavy snow.

“Weather in the mountains can change suddenly resulting in hazardous driving conditions,” the alert states.

“Surfaces such as highways, roads, walkways and parking lots will become icy, slippery and hazardous.”

All drivers should adjust to winter driving behaviour and use winter tires and chains.