A Tsawwassen resident made a troubling discovery this week – an estimated 300 to 500 used syringes stashed in their yard in an old cardboard box.
Jul 5, 2020 7:45 AM By: Ian Jacques 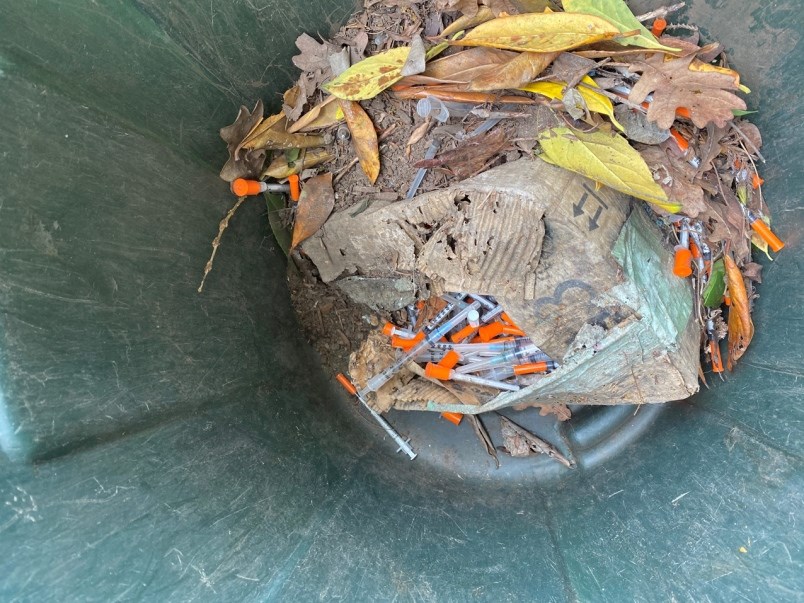 A Tsawwassen resident made an alarming discovery this week – an estimated 300 to 500 used syringes stashed in their front bush in an old cardboard box. PHOTO CONTRIBUTED

A Tsawwassen resident made an alarming discovery this week – an estimated 300 to 500 used syringes stashed in their front bush in an old cardboard box.

Liam McGee told the Optimist that the needles seemed to be completely random sizes and uses indicating that this was likely a drug user using whatever needles they could get their hands on.

“We had a landscaper in our yard on Tuesday evening [June 30] cleaning up a bit and he reached into the bush with his rake and saw a box. He reached in and saw a bunch of needles in there, McGee said. “We contacted the City of Delta and they came and collected the box. This is very alarming as this is a bush my dog has been into investigate and the neighbourhood I live in is filled with kids.”

McGee said he let his neighbours know about the finding so they could also keep an eye out.

“This could be something that might show up in another yard – who knows,” said McGee.

“We also notified our Occupational Health Nurse to ensure the incident and syringes were dealt with appropriately and safely including disposal,” McGill said. “Staff will also review the incident to confirm that all appropriate precautions were taken.”