Fallout from pictures of Prime Minister Justin Trudeau dressed up in brownface has reached a B.C. riding where an incumbent Liberal MP's signs were vandalized.
Sep 19, 2019 2:23 PM By: Castanet 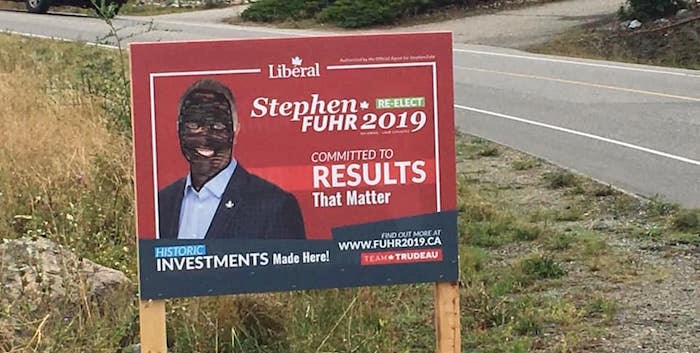 Fallout from pictures of Prime Minister Justin Trudeau dressed up in brownface in 2001 has reached the Kelowna-Lake Country riding.

At least two election signs for MP Stephen Fuhr were vandalized overnight. The perpetrator in both instances changed Fuhr's likeness to black.

The signs have since been taken down.

Fuhr made a brief comment on his Facebook page: "So this happened overnight here in our community. Sad. If anyone has information or saw this occur, please contact my campaign office at 778-436-8648 or you can contact the RCMP directly," he posted.

Castanet has reached out to Fuhr for additional comment.

Kelowna city councillor Mohini Singh was appalled by the actions of the vandal.

"As a city, we have worked so hard to build an inclusive community.... this is shocking, despicable, disgusting –very Un-Canadian," Singh told Castanet.

"It's no way to win an election. There are bigger issues we as a country need to focus on. This is absolutely deplorable."

Our sign team was out this morning and saw one of the other candidates signs defaced," she said.

"I reached out to their campaign, and the candidate directly to let them know. This is unacceptable, and I definitely do not condone this behaviour."

Trudeau issued an apology for his actions while on the campaign trail Wednesday evening.

He didn't consider it racist at the time, "but now we know better," he said. "This is something unacceptable and it is racist."

Since then, two other images, including a video, have emerged of Trudeau in blackface.

A Liberal spokesperson said the video came from the early 1990s.