The BC Wildlife Federation (BCWF) is hoping the public can make their job easier by reporting people who break fisheries, wildlife, and environmental protection laws. And to make it easy, the BCWF has developed a smartphone app.
0
Sep 4, 2018 4:23 PM By: Joel Barde

Given its size, policing B.C.'s vast wilderness is a herculean task, carried out in large part by the province's Conservation Officer Service (COS). 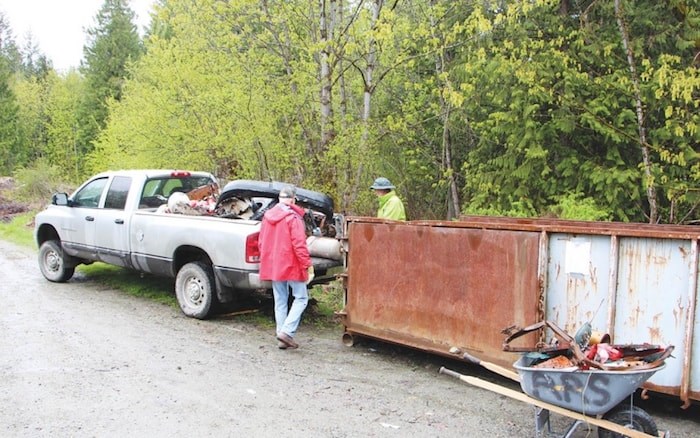 Reporting The BC Wildlife Federation has released an app that makes it easy to report an environmental crime, like illegal dumping. Memebrs of the Pemberton Wildlife Association are pictured cleaning up garbage around the Grean River Forest Service Road last spring. (Photo: submitted)

To that end, the BC Wildlife Federation (BCWF) is hoping the public can make their job easier by reporting people who break fisheries, wildlife, and environmental protection laws.

And to make it easy, the BCWF has developed a smartphone app.

"This puts a tool in your hand, that you can use anywhere at anytime to report a potential infraction," said Jesse Zeman of the BC Wildlife Federation.

Despite the hiring of 30 additional COS officers this year, bringing the number across the province to 130, "We're never going to have enough conservation officers to cover every square inch of what's going on," he said.

Available for free download, the Conservation App has a user-friendly interface that makes it easy to notify the proper authorities when people break the rules.

Quietly released in December 2016, Zeman said that app has already been downloaded 6,000 times, with many learning about it through social media.

The hunting and angling organization has just released an updated version of it, which includes an improved user interface and better map detail. Zeman said that the BCWF plans on further promoting it, and wants everyone, not just hunters and fishermen, to consider downloading it.

So far, over 500 infractions have been filed using it, he said

According to Zeman, many of the reports have had to do with illegal waste disposal, which is a perennial problem in the Pemberton area.

Zeman said that a man was recently caught illegal dumping near Squamish thanks to the app, though he couldn't show Pique the photo, because "his face—and middle finger—are in the photo."

The conservation app, he explained, is designed to improve reporting, by incorporating things like geo-location and time into the reports.

It's also designed to be used in the backcountry. Users can use the app while out of cell range. As soon as they get service or WiFi, the report is sent to the BCWF server, which redirects it to the proper governmental department for action.

Users even receive a message when their report is seen.

According to Chris Doyle, deputy chief of the BC Conservation Officer Service (COS), the tool is a welcome advancement.

"It's another tool that allows us deal with non-compliance out there," said Doyle.

However, he also noted that because environmental crime occurs in remote parts of the province, there are sometimes no witnesses to it, so patrols are an important part of the role of COS officers.

According to Doyle, COS gets thousands of reported violations a year. Since April 1, it has received over 3,208 across the province and 185 in the Sea to Sky region.

Many of the incidents are reported through the COS's popular Report All Poachers and Polluters program, a toll-free tip line and online service that also allows you to report known or suspected violations anonymously.

That said, Doyle is eager to promote the Conservation App, saying that the more reports that COS gets, the better it can do its job. "The more information we can get, the better," he said.