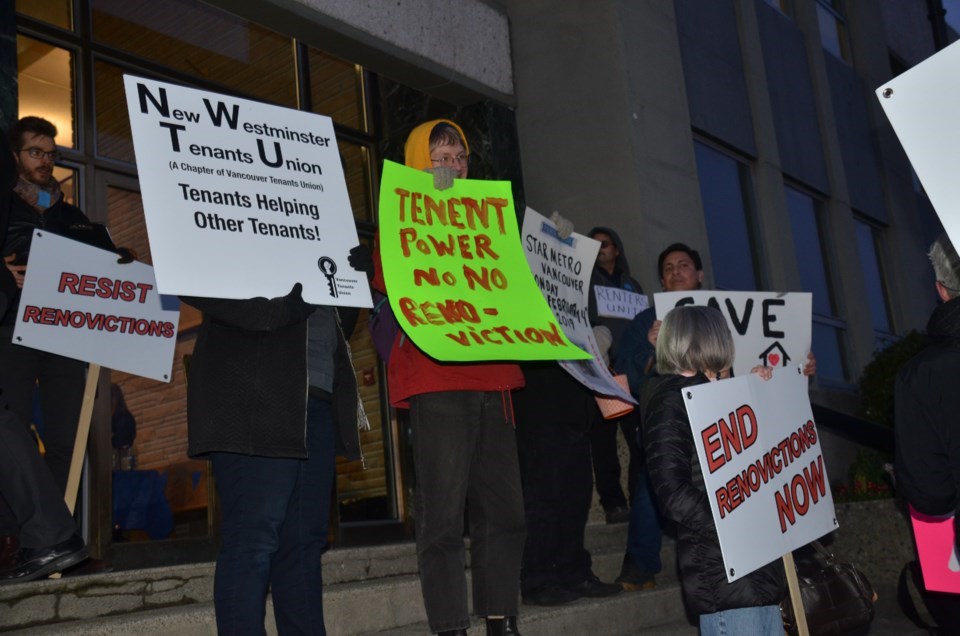 Tenants descended on New Westminster City Hall in February 2019 to support the city's plan to take action to prevent renovictions.Record/File

The B.C. Court of Appeal has upheld a City of New Westminster bylaw aimed at deterring renovictions.

In an April 30 ruling, the British Columbia Court of Appeal ruled the City of New Westminster had the right to adopt a bylaw amendment to deter the practice of renovictions and to help preserve affordable rental housing. The appeal relates to city council’s adoption of a business regulations and licensing (rental units) amendment bylaw that includes regulations controlling how landlords and rental building owners can undertake renovations, and a number of regulations pertaining to restrictions on evictions.

A landlord, 1193652 B.C. Ltd., argued the bylaw was beyond the city’s authority in the Community Charter. The Tenant Resource and Advisory Centre and Rental Housing Council of British Columbia (Landlord BC) were intervenors in the appeal.

“This important ruling supports the city in taking bold steps to directly respond to the housing crisis,” Mayor Jonathan Cote said in a press release. “Our hope is that the court’s decision could empower other municipalities to develop similar bold regulations as we all work to preserve and create more affordable housing in our cities.”

The  amendments to the city’s business regulations and licensing (rental units) bylaw added new regulations to restrict evictions, such as when they can be considered, provisions for temporary accommodations for tenants in cases when evictions are deemed necessary, provisions to prohibit increases in rents after renovations are done, punishments for contravening the bylaw, and occasions when exemptions would be considered. In addition to revoking the business licences of multi-family rental property owners who don’t comply with the bylaw, the city established fines of $500 and $1,000 for evicting tenants without permits, evicting without relocating tenants, failing to provide a relocation agreement or providing relocation documentation and implementing an excessive rent increase.

“This ruling by the highest court in the province confirms that it was within the city’s powers to adopt the amendment bylaw, stating that ‘the city has a long-standing concern with the need to preserve local affordable rental housing and has recently become particularly concerned with a perceived increase in the risk of renovictions in New Westminster,’” Cote said.

According to the City of New Westminster, there has been a “dramatic” decrease in the number of renovictions that have taken place since the new regulations were enacted in 2019.

“The amendment bylaw regulations will continue to protect the city’s aging stock of over 9,000 purpose-built rental units, in 300-plus buildings, representing over 60% of the rental supply,” said Emilie Adin, the city’s director of development services. “We have gotten contacted by municipalities across Canada who have an interest in our approach to tackling renovictions.”

When council adopted the bylaw in February 2019, tenants applauded the city’s “trail-blazing” efforts to prevent renovictions. More than 30 tenants and housing advocates appeared before council in February 2019 to voice support for the bylaw amendment.

David Hendry, an organizer with the New Westminster Tenants Union, said the bylaw won’t be the “magic bullet” that protects all tenants, but it will put the burden of proof on landlords, not tenants.

“They must prove that these suites need to be vacant, and they will ensure that people who do have to leave will not lose their housing security or become homeless,” he told council in February 2019. “In this sense it’s a huge victory, and I commend New Westminster city council for having the political courage to do this.”

Masoud Amin, a housing advocate in Vancouver, told council in 2019 that bylaws like the one adopted by New Westminster will help protect vulnerable people.

“(The bylaw) will save lives, will keep families together and will keep communities together. It will make our community strong,” he said. “Having shelter is a human right. … I am hoping that every other jurisdiction in the province will copy what you are doing.”

In June 2019, council approved a new bylaw that was intended to enhance the bylaw adopted a few months earlier. The petitioner argued that this “impugned bylaw” was unauthorized by the Community Charter, but the three Court of Appeal for British Columbia judges ruled that was not the case.

Because the amendments to the business regulations and licensing (rental units) bylaw can be challenging to understand, the city has developed a Tenants in New West brochure, noted the city’s press release. The brochure can be found on the city’s website at www.tinyurl.com/NWRenovictions.

New Westminster aims to be a provincial leader and end renovictions
Jan 16, 2019 3:16 PM