This suspected “garbage” bear — struck by a car off Chilko Drive in Coquitlam, in October 2016, and euthanized two days later — will be on permanent display in the lobby of Coquitlam city hall as early as next week.
0
May 2, 2018 9:16 AM By: Janis Cleugh 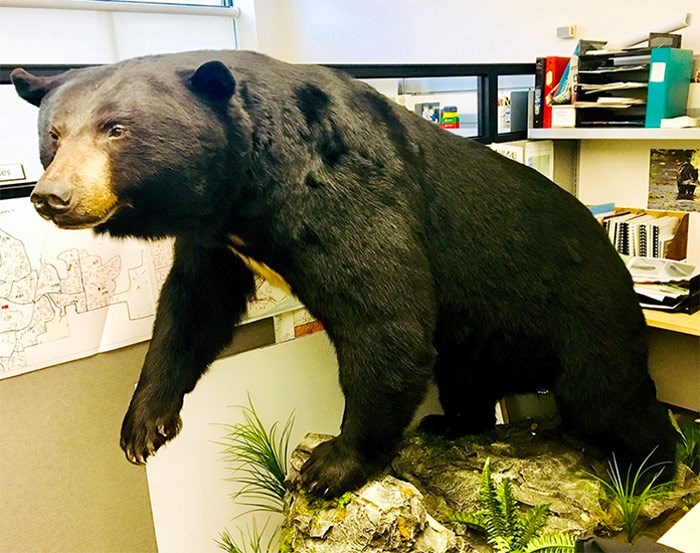 This suspected “garbage” bear — struck by a car off Chilko Drive in Coquitlam, in October 2016, and euthanized two days later — will be on permanent display in the lobby of Coquitlam city hall as early as next week. Photograph By CITY OF COQUITLAM

A fed bear is a dead bear.

And if Coquitlam residents don’t get the message, they can stop by city hall where a permanent display of a suspected “garbage” bruin will go up as early as next week.

The former black bear, which at the time it died was about eight years old and weighed 600 pounds, was hit by a vehicle off Chilko Drive in October 2016.

Two days later, due to its injuries and inability to leave the neighbourhood, it was euthanized by the provincial Conservation Officer Service. Its remains were given to the Katzie First Nation, who used the fat for ceremonial purposes, and the pelt was handed over to the city.

Yesterday (Monday), Jozsef Dioszeghy, Coquitlam’s general manager of engineering and public works, told council-in-committee the male animal was believed to be a “garbage bear” — meaning, it was habituated to trash left out by neighbourhood residents.

And because of the high number of human-bear conflicts each year — as well as the city’s ongoing efforts to remind householders to lock up their bins until collection day — staff said they wanted to show the stuffed animal in a Plexiglas case in the lobby at city hall.

Steffanie Warriner, Coquitlam’s environmental services manager, said the city has displayed stuffed cougars and bear pelts at past community events as a way to draw in curious visitors and to start discussions about wildlife roaming the municipality.

Still, despite the hefty penalties and recent changes in the city’s garbage pick-up schedule, she said its campaign continues to fall on some deaf ears: Late Monday, city staff recorded nearly 30 violations including several second-time offenders.

“This is despite 10 years of education including media stories and print ads, door-to-door outreach, community outreach at events, Bear Smart 101, videos and social media as well as warnings and ticketing,” Kathleen Vincent, Coquitlam’s manager of corporate communications, told The Tri-City News today (Tuesday). “The proposed display is part of our efforts to emphasize the need to reduce wildlife attractants in our urban areas.”

“We all need to do our part to keep our neighbourhoods — and our wildlife — safe,” she said.

Dioszeghy told council-in-committee a similar bear display exists at the Vancouver International Airport and there hasn’t been an impact on travellers. “We don’t really expect a negative reaction to this,” he said.

(Port Moody city hall also now has a similar exhibit though temporary and on a smaller scale. That bear is from the Chilliwack area and its display was part of PoMo’s annual Bear Essentials seminar; it’s had no adverse comments, said Rosemary Lodge, the city’s manager of communications and engagement.)

But a few Coquitlam councillors voiced their concern, saying they would feel uncomfortable with such a large, dead creature on show in a civic building (the total price tag was $6,600 of which half was offset from a provincial grant after the city attained Bear Smart status last year).

Coun. Bonita Zarrillo questioned if the bruin would serve as a deterrent. “It’s a much deeper conversation than just putting a bear in some Plexiglas,” she said. “Personally, it upsets me if I have to come to work and walk past it.”

Zarrillo then stepped down as committee chair to call for a motion that would see council vote on the topic, at its regular meeting that night; there was no seconder as the majority of council was in favour of the display.

Coun. Terri O’Neill also objected, noting on The Tri-City News’ Facebook page (which also received a lot of unhappy feedback after a photo was posted Monday night): “I think such a display will be tacky, off-putting, offensive to some and generally more sensational than educational.”

Coun. Dennis Marsden told city staff to be prepared for a pushback and to ensure its messaging around the exhibit is meaningful while Coun. Teri Towner added she’d like to see the stuffed bear be placed in other public facilities, such as pools and libraries, to draw a bigger audience and to get the word out about bears waking up and food left out.

“Everybody in Coquitlam has to be aware they live amongst us,” she said.

Last year, the city received more than 1,000 calls about bears and wildlife — the highest number for a B.C. community — with more than half related to unsecured garbage.

As a result, Coquitlam issued 431 solid waste management bylaw notices, up from 243 in 2016, as part of a ramped-up enforcement campaign to make sure residents are securing trash and other attractants.

— with files from Gary McKenna

• The average life span of a black bear is 15 to 20 years. A garbage-habituated bear’s life is often cut short;

• Black bears can come in all shades from white blond to dark black and even red;

• Canada is home to three bear species: polar, grizzly and black — the latter being the most common in Coquitlam;

• About 80% of the black bear’s diet consists of plants. In the summer months, they eat grasses, herbs, sedges, fruits, berries and nuts. They also eat insects, salmon and carrion.

• Some black bears (usually males) may not hibernate if the weather is good and food is still abundant.