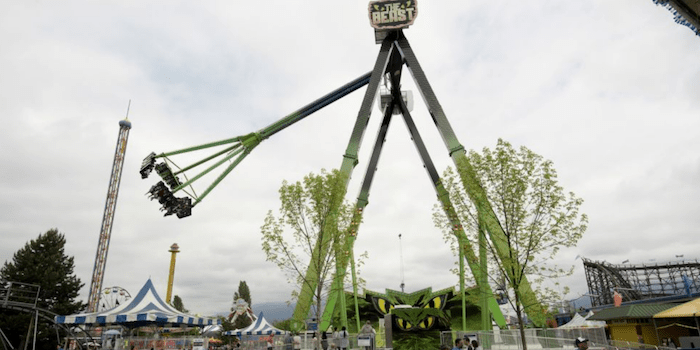 Playland's popular pendulum ride, The beast, broke down on Monday, Aug. 12, and visitors in the line were showered with oil but no one was injured.

The ride, which was purchased by the theme park in 2015 from Dutch manufacturer KMG, reportedly began to shake and make a noise like metal grinding on metal.

Operators safely brought the ride to a stop and helped people off, but McKenna Henderson says the whole event was nerve-wracking.

She says "every second felt like an hour" as she and a friend waited for their turn, and even after the pendulum had stopped, some sort of oil continued to spew and spattered onlookers.

"It was like a shower. It was spraying everywhere — clothing, hair, bags. It got me on my clothing and hair. It was really warm. It appeared green."

Henderson noted that the oil seemed to come from the top of the steeple supporting the swinging arm.

Vancouver Is Awesome spoke to Laura Ballance, Playland spokeswoman, who reports that the ride stopped due to a mechanical issue rather than a structural failure, and that an investigation is underway.

She added that all rides are inspected daily by the operator as well as annually by Technical Safety BC and third-party safety consultants, and engineers will assess The Beast again once it is repaired to ensure it is safe.

Ballance says all aspects of the malfunction will be examined and the details will be included in a report. She adds that all rides at Playland shut will down if there is a mechanical issue as a safety precaution.

"With the oil, it's not ideal, but we will deal with those guests on a case-by-case basis," she said.

In 2017, The Washington Post reports that a pendulum ride at the Ohio State Fair called The Fire Ball suffered a 'catastrophic failure' and resulted in the death of a young man as well as several other injuries. However, Ballance said that there are a couple of important differences between the two rides.

"Ours is a permanent version, their's was temporary. Ours does not travel," she said. "Also, their's was much older and our was purchased from KMG in 2015."

Ballance added that Playland voluntarily shut down The Beast for two days to conduct a safety investigation when the Ohio State Fair incident took place.

Technical Safety BC told V.I.A in an email that it is aware of the incident and that its safety officers are currently conducting an investigation.

Ballance said there is no timeline for repairing, inspecting or reopening The Beast.