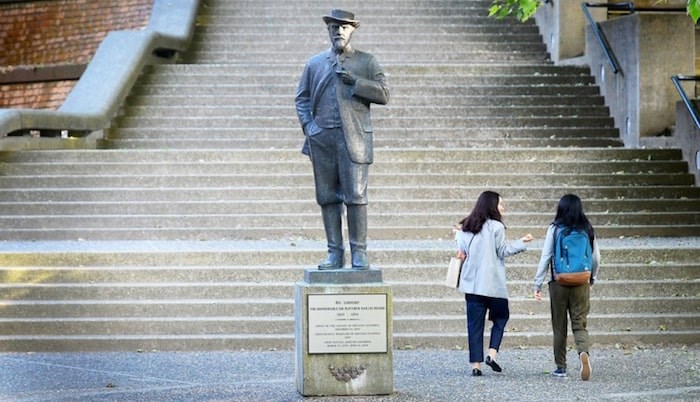 The motion notes that the federal and provincial governments have both exonerated Chief Ahan and the five Tsilhqot’in war chiefs who were wrongfully executed in Quesnel “under the hand” of Begbie. It also says the city removed the Begbie statue as a result of a request from the Tsilhqot’in national government.

In July, the Tsilhqot’in national government supported the statue’s removal, saying its presence represents a legacy of pain and tragedy that’s still felt to this day.

Begbie, who was British Columbia’s first chief justice, presided over an 1864 murder trial in Quesnel of five Tsilhqot’in chiefs who were found guilty and sentenced to hang. The following year, a sixth chief, Chief Ahan, was tried, convicted, sentenced to death and hanged in a downtown location near Begbie Square and Begbie Street.

A second motion set to be considered at tonight’s meeting relates to the renaming of Sapperton Landing Park. A motion, also being put forward by Puchmayr, is calling on Metro Vancouver to consider a new name for Sapperton Landing Park that better reflects the site’s First Nations history.

According to the motion, the Qayqayt First Nation, also known as the New Westminster Indian Band, was unceremoniously removed from its village in the vicinity of Sapperton Landing Park and moved across the Fraser River to Brownsville. The motion says this unlawful intrusion caused irreparable harm and devastation of the Qayqayt people, and the loss of their village caused a loss of identity and dignity and displaced generations of New Westminster’s original inhabitants.