Beyond the Conversation is a volunteer organization that helps people practice their English skills and foster relationships
The Canadian Press Feb 27, 2018 10:28 AM 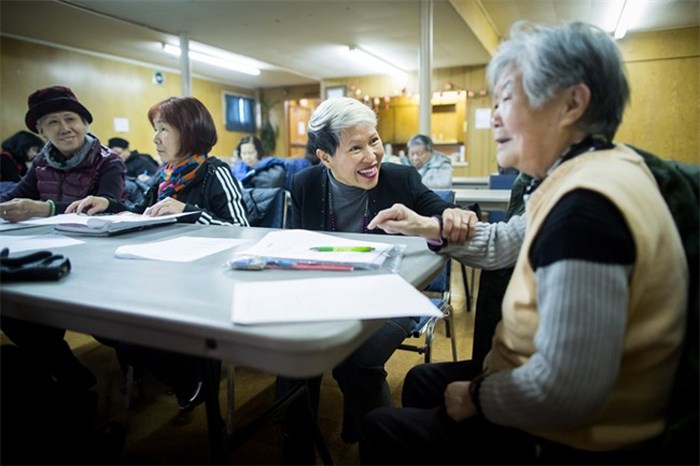 Amie Peacock, centre, founder of the volunteer group Beyond the Conversation, speaks with a senior citizen during a weekly group meeting to help people practice their English skills, combat social isolation and foster relationships, in Vancouver, B.C., on Friday February 23, 2018. The problem of social isolation, which can have serious consequences on a person’s mental health and mortality, gained international awareness when the United Kingdom appointed a minister of loneliness in January. Vancouver’s Seniors Advisory Committee has developed a report on the issue and delivered its recommendations to city council last month. THE CANADIAN PRESS/Darryl Dyck

Amie Peacock describes her mother as "a social butterfly," but when she came to visit her in Vancouver from the Philippines a lack of friends and a language barrier left her miserable and lonely.

"I couldn't imagine there are more people like her in our city and, sure enough, when I started looking at the cause and effects of social isolation, I realized that the problem is so much greater than what I had imagined," Peacock said.

Although her mother ended up leaving six months after arriving in 2001, Peacock resolved to tackle the issue.

"To me, social isolation can affect rich, poor, young or old," she said.

The problem of social isolation, which can have serious consequences on a person's mental health and mortality, gained international awareness when the United Kingdom appointed a minister of loneliness in January. Vancouver's Seniors Advisory Committee has developed a report on the issue and delivered its recommendations to city council last month.

In 2016, with help from Little Mountain Neighbourhood House, Peacock launched Beyond the Conversation, a volunteer organization that helps people practice their English skills and foster relationships.

Groups meet on a weekly basis in community centres, churches and coffee shops to discuss anything that's pertinent to them at the time, from Christmas traditions to current events. The subject matter is determined by the group and even touches on basic social interactions, like how to create small talk with neighbours.

At Victoria Drive Community Hall, up to 30 seniors whose first language is predominately Mandarin or Cantonese, meet every Wednesday morning.

Theresa Gee, a retired elementary school teacher, writes English phrases on a board related to celebrating Chinese New Year, the main focus of a recent discussion.

The English skill level varies among the members. Some can carry on a conversation while others, particularly those in their 70s and 80s, speak only a few words, Gee said. People with stronger language skills help translate for others who might get stuck throughout the discussions.

Silinia Law, 69, grew up in Hong Kong and is among those who already spoke some English. She joined the group when it was first designed exclusively as a social gathering, but said she suggested to Gee that she teach English as well.

While Gee sees people making significant gains, it's not just better language skills that mark the success of the meetings.

"Really in the guise of learning more English, they are actually benefiting socially and connecting with each other and making new friends," Gee said.

Law, who comes to the group with her husband, agrees that it's made a huge difference in her social life after feeling she had no friends or relatives to connect with.

"When I (was) first coming here, I feel very lonely and my husband asked me, 'What is wrong with you,' " she said. "Then (we) come here and we meet some friends and we're talking together and then we feel happy."

There are 11 similar groups that meet across the city and its membership is not exclusively seniors, Peacock said. A number of younger immigrants and refugees have joined the groups.

"We really need to foster their sense of belonging," Peacock said of the younger members.

"These are senior people who basically brought up their kid's kids, so ... this is the first chance they've had to actually learn English," he said.

"Most of these people don't have much disposable income, so for them to come here for basically nothing is a big thing for them."

Peacock said she's exploring the idea of setting up groups in highrise apartment buildings. She also plans to set up 10 more groups throughout Metro Vancouver this year.