The 10 wealthiest families in British Columbia have a total net worth of $24.9 billion, or approximately the total worth of the province’s bottom 1.32 million people, according to a new Canadian Centre for Policy Alternatives report.

The average wealth of the families in the top 10 is $2.51 billion, while the median net worth of all households in the province is $429,400. This means the average top-10 billionaire family is 5,845 times wealthier than the B.C. average.

The gap between the ultra-rich and everyone else is increasing, according to the CCPA. Between 2012 and 2016, the province’s 10 richest families increased their net worth by an average of $299 million each year. Meanwhile, the total wealth of those in the lowest quintile increased by only $6,900, on average. Those in the highest quintile – excluding the wealthiest 10 families – increased by an average of $491,500. 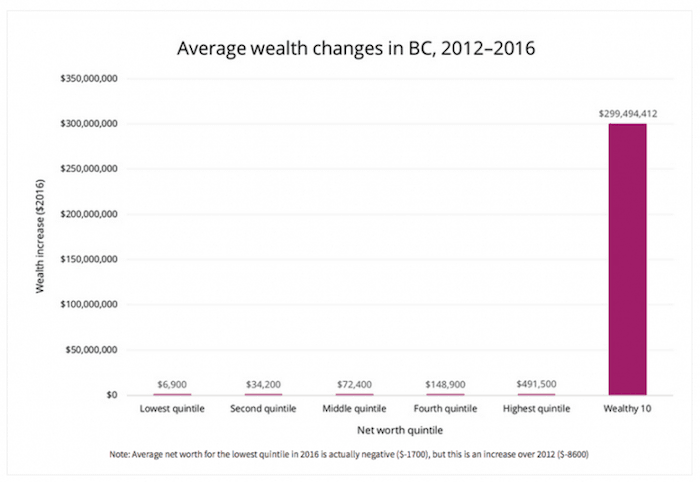 The province’s top 10 wealthiest families are, according to the CCPA (net worth calculated using 2016 data):

As for where these families are getting their money, not all of them have earned it by their own efforts. Seven of the 10 families got their wealth passed down to them from older generations. Only the James Pattison family, the Lalji family and Chip Wilson’s family did not receive the bulk of their wealth through inheritance.

Net worth is calculated as the sum of all family assets – including homes, financial investments and vehicles – minus all debts.