A customer uses a bitcoin terminal at Waves Coffee Shop on Lonsdale Avenue. Mike Wakefield photo It’s April, which means the taxman cometh. But the taxman is not going to ask you to pay your tax bill in bitcoin or any other form of cryptocurrency.
Apr 4, 2018 4:42 PM By: Jane Seyd 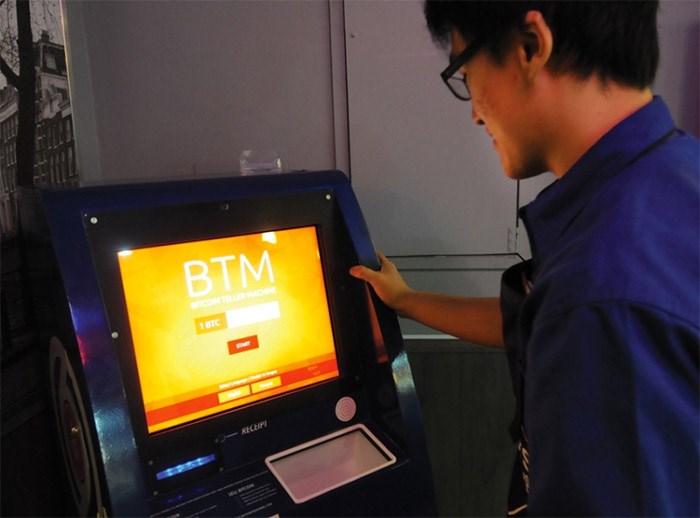 But the taxman is not going to ask you to pay your tax bill in bitcoin or any other form of cryptocurrency.

Another North Vancouver resident found that out the hard way recently, after scammers convinced her that if she didn’t pay $6,000 to the Canada Revenue Agency through bitcoin instantly, police would come knocking at her door.

Panicking over the thought of being arrested over an alleged bill for back taxes, the middle-aged woman drove to a bitcoin location and sent the money transfer.

“Once you hit ‘send’ on that terminal, they have (the money) instantly,” said De Jong.

When the woman returned home, she received another phone call from the same person pretending to be tax collector, demanding more money. That’s when she realized she’d been scammed, said De Jong.

It’s the second time in a few months that a North Vancouver resident has been scammed into paying alleged “taxes owing” through bitcoin to scammers.

In January, a man was out $3,000 after paying money to scammers pretending to be tax collectors through bitcoin.

That incident was very similar to the recent one, which happened March 19, said De Jong. But he added it’s impossible to know if the two are connected because similar scams are taking place worldwide all the time.

Variations of the CRA scam are not new – people have been getting similar phone calls for years from fraudsters posing as tax collectors demanding money.

Being told to pay with bitcoin is a recent twist, however.

Police say it’s not hard to see why fraudsters would want to use bitcoin – it’s almost impossible to track transactions through the system, which relies on the victim punching in a code allowing access to their bank account. The person receiving the cryptocurrency could be anywhere in the world.

De Jong warned as tax time is approaching, scam artists will use a variety of creative means to separate victims from their money.

The CRA will not call up taxpayers and threaten or coerce them into paying a tax bill, said De Jong. The taxman also does not accept bitcoin as a method of payment, he said.

If anyone wants to confirm that a CRA representative has actually contacted you, De Jong advised residents to call the CRA at 1-800-959-8281 for individual concerns or 1-800-959-5525 for business-related calls.

North Vancouver RCMP will host a fraud awareness event April 19, 10 a.m. to 2 p.m. at the Pipe Shop at The Shipyards, 115 Victory Square Way in North Vancouver.